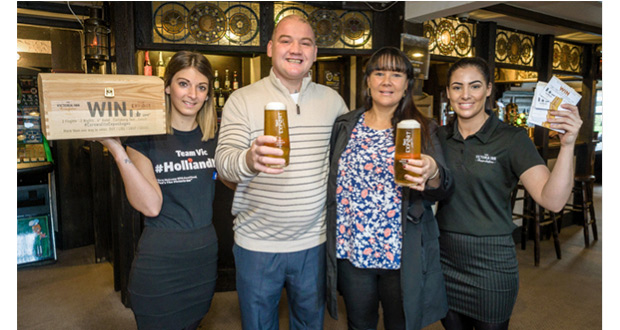 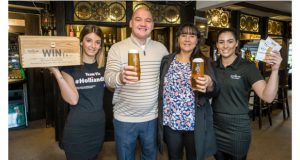 When Team Vic’s Natalie Whear & Holli Pike from The Victoria Inn decided to run a competition, they contacted Henry Milton, their Carlsberg sales rep to see if he could help.

#HolliandNat (their digital name) launched the competition at two St Austell pubs, the Victoria Inns in Roche and Threemilestone that are run by Inn Cornwall that also recently took over the Norway Inn in Perranworthal.

With well over 2,000 entries, twenty-four were shortlisted for the final round and on November 8th, with a film that was streamed live on social media from the Norway Inn, Mel Hudson a customer from the Victoria Inn, Roche was picked as the lucky winner.

Mel was absolutely delighted to hear the good news and cannot wait to go to Copenhagen with Stuart following his recovery from the stroke that he suffered. As anyone dealing with a stroke patient knows, it’s a long, arduous and deeply emotional journey to recovery for the patient and the carer.

The team from Inn Cornwall are very much part of their customers lives and involved in the communities. When they realised that Mel and Stuart had won the competition, they decided that if there was any worthy winner it was the Hudsons and they decided to treat them by paying for an extra night at Copenhagen as well as for the car parking at the airport.

Natalie Whear said, “We are so happy that we could make a difference to their lives. Our customers mean the world to us and the Hudsons absolutely deserve this. We’re successful only because our customers return to our pubs and we all feel like one big happy family.”