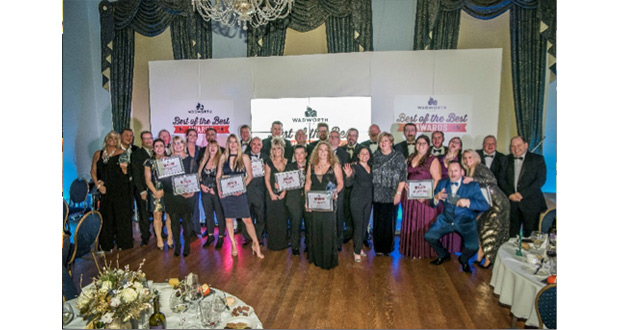 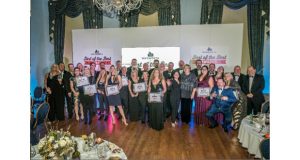 Wadworth, the regional pub operator and family brewer, celebrated the success of their best managed and tenanted pubs at its annual ‘Best of the Best Awards’ last night, recognising 26 pubs.

The Best Tenanted Business Partners Award was given to multiple operator of two Wadworth pubs, Danny and Tara Adams.  Danny and Tara run the Greyhound in Bromham, Chippenham and earlier this year took over the George in Sandy Lane.  They transformed the George in Sandy Lane offering a daily carvery and specials menu creating a fantastic customer experience.  They also received the award for Best Retail and Digital Marketing Pub of the Year.

Best managed house manager was awarded to Ray Turnbull of the Bartons Mill, Old Basing.  This year the Barton’s Mill doubled in size with the addition of 12 bedrooms to this destination food and family venue and Ray has continued to build the business.

Another big winner of the night went to the head chef, Jake McBride of the Avon Causeway in Hurn who won Managed House Chef of the Year and had three of his dishes chosen to be served at the awards event.

Other winners included Chris Masters of the Hadleigh Bowling Green who won Best Managed House Food pub and Jacky Crowley of the Cock Inn, Warminster and Hannah and Ryan Coates of the Kings Arms, Melksham who were both recognised for their Beer and Cellar Quality.  Two special recognition awards were presented by Chairman Charles Bartholomew to Derek and Brid Phelan of the Golden Lion, Winchester and Mark Gallimore of the Bull in Theale.  Best Tenanted Food Pub went to Harwood and Jo Warrington who run the Trigger Pond in Bicester following two judging visits and a mystery visit to the site where they were recognised as the clear winner in this category.

Speaking after the ceremony, Chris Welham, CEO of Wadworth, commented: “The ‘Best of the Best Awards’ is a brilliant event where we can show our appreciation to our great pubs and the people who put their heart and soul into running them.  We are very proud of having some of the best pubs in the west country and these awards gives us the perfect opportunity to join together with our managers, business partners and team members and recognise their hard work.  Pubs just wouldn’t be the places they are without the fantastic people running them”.