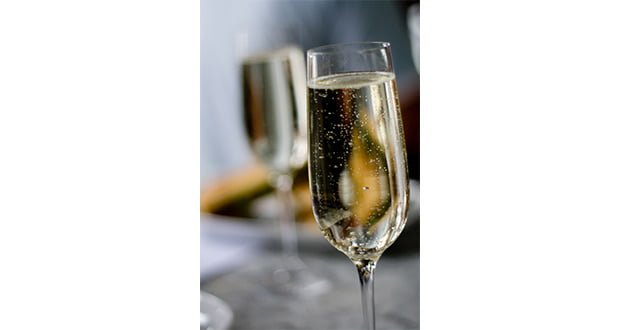 A record number of English and Welsh sparkling wine was sold in the UK last year with Brits buying 4 million bottles, up 6% on 2017.

UK consumers bought more home-grown fizz than they did sparkling wines from Australia, the US and Germany combined in 2018.

Italy remains top of the pops as the UK’s number one favourite fizz, selling around 117 million bottles in 2018, thanks to Brits’ love of Prosecco, followed by Champagne which sold almost 24 million bottles.

Coming third in the UK’s favourite fizz top ten is Spain, selling over 23 million bottles, mainly Cava, the rest of France (excluding Champagne) sold over 5 million bottles, with the UK coming in fifth.

English winemakers are looking forward to even bigger sales in the next couple of years when wine made from grapes grown in the sweltering summer of 2018 arrives on supermarket shelves.

Last year was a vintage year for both quality and quantity for English and Welsh wines, with a record-breaking 15.6 million bottles of still and sparkling produced. This compares to 5.9 million in 2017.

The English wine industry is reaping the benefits from a huge investment in the sector leading to an increase in vines planted over the last ten years.

1.6m vines were planted – over 1000 acres last year – and vine plantings are expected to exceed the 2million mark in 2019, confirming the UK wine industry as one of the fastest-growing agricultural sectors in the UK.

Last year’s bumper British bottle count comes when UK sales in the sparkling wine category are slowing, partly down to the UK’s excessively high duty rates and the fallout of Brexit.

Following Brexit’s impact on the pound combined with inflation the wine trade is facing a tough trading landscape.

“Everyone should take the opportunity to toast our talented English wine makers with a glass of home-grown fizz on St George’s Day. A bit like St George, against all the odds, the UK wine trade has come out fighting and proved it can compete with the best of the best at a global level. The Government needs to do more to support this emerging British success story and the Chancellor can and should start bringing down his excessively high duty rates after he unfairly singled out wine for a duty rise in his last Budget.”

English sparkling wine is made in the same traditional method as Champagne, meaning it is left to age in the bottle, usually for about three years.

Sparkling wine accounts for 68% of all English and Welsh wine produced and has gained global recognition for its quality.

The success of English sparkling wines has led Champagne houses Vranken-Pommery and Taittinger to invest in vineyards in the south of England as the chalky soils and climate are very similar to those found in the Champagne region.

Duty is currently so high that 55% of an average priced bottle of still wine sold in our shops and supermarkets is now taken by the Treasury in tax and VAT.

Around two thirds of the wine made in England and Wales is sparkling wine which attracts the highest level of duty, at £2.86 (plus VAT) on a bottle of fizz – a third higher than the £2.23 duty plus VAT UK consumers pay on a bottle of still wine.

By contrast, in France, consumers pay the equivalent of just 7p a bottle on duty for sparkling and 3p for still.