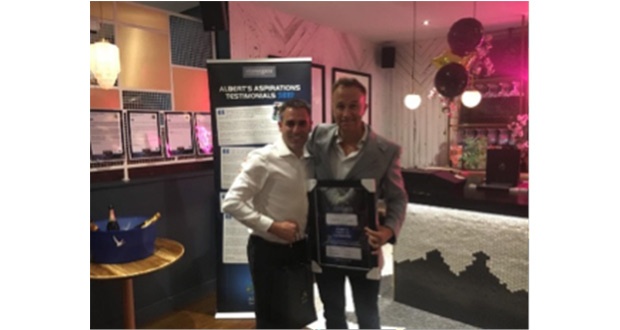 Bournemouth local, Jonathan Masterson, has graduated from ‘Aspirations’, the highest internal qualification offered by Stonegate Pub Company. Jonathan’s success was celebrated yesterday, Wednesday 4th September, when he presented his final project to the Stonegate Board of Executives.

The accolade is not just a career landmark, with Jonathan already taking up an Area Management position, but his participation is an achievement in itself – Jonathan was one of only 12 managers selected to take part from across the 772 strong pub company this year.

It marks the end of a 14-month long journey undertaken by Jonathan and his colleagues, which saw the group complete nine high-performance modules and a real-business project, in preparation for the leap into multisite management.

Never imagining this is where he would end up after starting his career behind a Walkabout bar in Bournemouth, when he landed in the UK from Australia nearly two decades ago, Jonathan is testament to the burgeoning opportunities in the hospitality industry. Now, after 18 years, he oversees eleven Slug and Lettuce bars in the south of England.

Having studied finance at university, Jonathan arrived in the UK to work and quickly caught the ‘pub-bug’ working behind the bar. From there he began working his way up through the industry’s internal hierarchy, reaching management before side-stepping into a field-based auditing role when he joined Stonegate. He is the only Aspirations participant to have already been promoted to Area Manager, before graduating.

Jonathan said: “I feel really privileged to call Bournemouth my home. It has been very accepting of me since I arrived here as a young man and was also the place I met my wife and the birthplace of our three lovely children.

“When I started at Walkabout eighteen years ago, I really thought it would just be a source of income while I had a bit of fun living in England. But boy, it has been so much more than that. As anyone in the industry will tell you, we love our work – in no other sector could you have quite the variation of experiences as we do in hospitality and I don’t think any of my colleagues would ever choose to work anywhere else!

“I’m very excited about where I am in my career right now and look forward to fulfilling my role to the best of my ability over the next few years. I’m not sure what the future holds, but I really feel ready for it after everything I’ve learnt during Aspirations over the last year.”

Tim Painter, HR Director of Stonegate Pub Company, said: “It’s our people that make up the backbone of this company and we have them to thank for our success. Jonathan is a valued member of the Stonegate team and she sets the bar for the many exceptional employees that work with us. A huge congratulations to her from all of us here at Stonegate!”