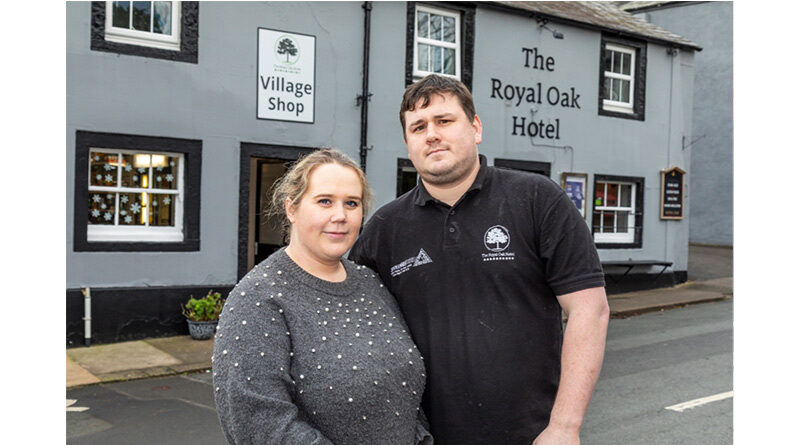 Publicans Rebecca and Joseph Richards have come to the rescue of local residents by opening a new village store at The Royal Oak Hotel in Beckermet, Cumbria.

The village store was opened with the expert help and a Community Services Fund grant from Pub is The Hub, the not-for-profit organisation that helps pubs to diversify and provide essential local services.

The shop has been opened in a former pool room after the publicans took over The Royal Oak in March 2021. The premises had been closed for two years but was reopened after a refurbishment with a focus on good quality food that is proving popular with diners locally.

The store is needed in the village as there are no other shops and it is around four miles to the nearest supermarket. Many villagers rely on family and friends to deliver shopping as there are limited transport links too.

The shop, which opens between 9am to 8pm everyday, offers essentials such as bread, milk and local produce as well as
takeaway foods such as pizzas and fish and chips.

Rebecca said: “It has been such a challenging time for local people and the village store is proving to be such a lifeline. Customers have asked that we start to stock meat products such as bacon and sausages so we already talking to a local butcher to broaden the range we offer.

She adds: “We have had such great support and positive feedback from villagers when we reopened the pub and introduced the new store. A lot of new faces have come into use the shop and we love it when customers stop for a chat, so we can see how they are doing.”

Pub is The Hub regional advisor Malcolm Harrison said: “The store’s opening has really helped Beckermet residents who now have somewhere to go for their essentials, takeaway food and also to have some of that much needed social interaction.

“Rebecca and Joseph have stepped in to help the villagers of Beckermet offering not just a village store but a great pub that a lot of support from those living locally.”