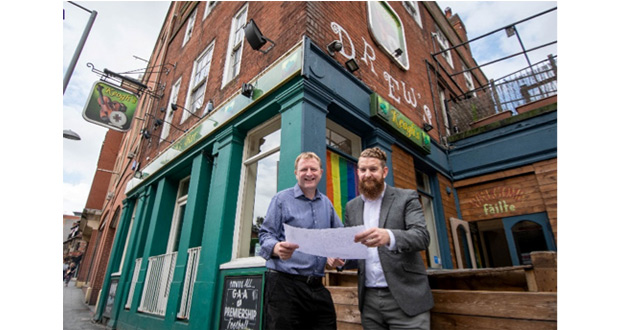 The Pub People Pub Company1 has taken on its eighth Star Pubs & Bars site, Keoghs in Nottingham city centre, where a £258,000 joint refurbishment starts on 19th August to transform it into its second Six Barrel Drafthouse, a craft beer and draught ale pub offering food and coffee.

Major changes to the outside of the Six Barrel Drafthouse will include the creation of a first-floor terrace overlooking the city. The space will have capacity for 50 and will feature festoon lighting, neon signs and planting. A new pergola at the front of the building with seating is also being added.

Andy Crawford, Operations director for The Pub People Pub Company says: “We opened Our first Six Barrel Drafthouse in Hockley in 2016 and it has proved very successful. As a result we’re keen to roll it out where the local demographics and individual pubs lend themselves to the concept. We’ve got a good working relationship with Star Pubs & Bars, who are flexible and responsive, so intend taking on more sites with them over the next few years.

“Keoghs is a prominent city centre site with two very busy bus stops nearby. The area has benefited from significant investment from other hospitality operators over the last 24 months including Nottingham Street restaurant which the new Keoghs will complement.

Says Star Pubs & Bars operations director, Alun Johnson: ” We’re delighted to be working with The Pub People Pub Company again. They’re great operators and one of the longest standing pub companies in the Midlands. We know from personal experience that they run a well-honed operation as they lease seven other pubs with us. Before taking on a new pub, they thoroughly research the immediate location and potential of the pub concerned including running these pubs on a temporary basis. I feel sure Keoghs will be another success story for them and wish them well with the planned roll out of Six Barrel Drafthouse.”