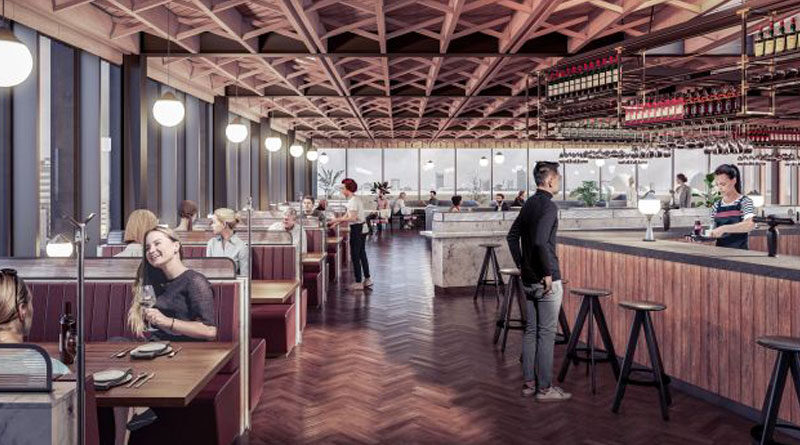 TODD Architects has submitted a planning application on behalf of Press Up Hospitality Group and sister company Oakmount to refurbish and redevelop Birmingham’s Grade II* Listed Central Methodist Hall into a destination hospitality and leisure scheme with up to 150 new hotel rooms and eight new bars and restaurants at ground and basement levels. The proposed scheme on Corporation Street will be operated by Press Up Hospitality Group under ‘The Dean’ brand. The Dean is a boutique, design-led hotel with locations in Dublin, Cork and Galway. This will be the first Dean location outside of Ireland. 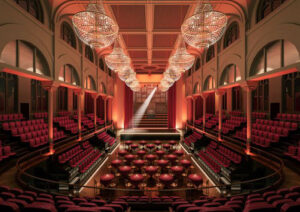 Originally built in 1904, the Central Methodist Hall became the legendary Que Club in 1989, attracting major artists such as David Bowie, Daft Punk and Blur. Despite becoming an important part of Birmingham’s musical and cultural scene, the club went out of use in 2017 and the building declined onto Heritage England’s At Risk Register.

TODD Architects’ hotel-led proposal sensitively extends and adapts this much-loved landmark, preserving many of its original features whilst once again allowing it to take its place at the heart of Birmingham’s cultural landscape. Fundamental to the plans will be the refurbishment of the Central Hall into a luscious 1500-seat event space, with the pulpit area redefined as a stage for visiting acts. In addition, a traditional members’ club cocktail lounge, two expansive external terraces and a flagship rooftop restaurant with panoramic views across the city are proposed.

Seamus Lennon, Principal, TODD Architects, comments:
“The Central Methodist Hall offers the opportunity to mix the height of Victorian grandeur with a fresh and contemporary take on the modern hospitality offer. Whilst it remains necessary to extend the building vertically to ensure the project is commercially viable, our proposals will ensure this is done sensitively and allow the full restoration of the Central Hall space to be enjoyed by generations to come.”

The proposed three-storey rooftop extension will be set back from the parapet and terraced backwards as the volume rises. A single-storey extension to the south will also be set back from the parapet and above this rests a new restaurant with a pitched roof matching the form of the original. The new elements make explicit reference to the qualities of the original building, whilst also utilising modern methods of construction and material technologies.

TODD Architects’ Seamus Lennon concludes:
“It is a rare opportunity to contribute to the ongoing story of such an important cultural landmark as Birmingham Central Methodist Hall. Building on our growing portfolio of hospitality and leisure schemes throughout the UK and our specialist knowledge in commercially successful adaptive re-use of buildings, our proposal will deliver a high-quality hotel and leisure destination that will have a transformative impact on the immediate neighbourhood and support Birmingham City Council’s wider regeneration targets.”