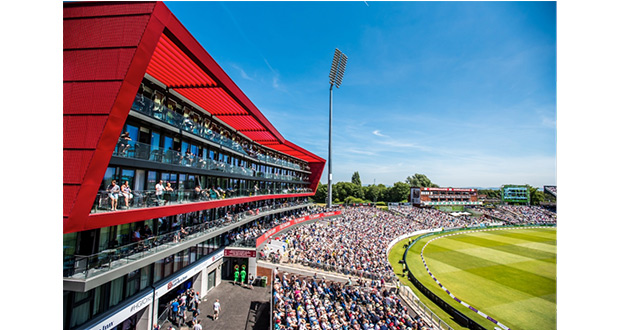 The hospitality team at Emirates Old Trafford has reported its busiest period on record after the Club hosted 10,000 hospitality covers across six ICC Cricket World Cup fixtures since 16 June. The Club had 6,600 staff on-site for the duration of the matches and had an aim to deliver a first-class hospitality experience for fans and supporters. Following the thrilling final which saw England crowned world champions on 14 July, the Club has already noticed a sizeable uplift in ticket sales for its upcoming Vitality Blast matches, which started on Sunday 21 July with Lancashire Lightning going up against Durham Jets at Emirates Old Trafford.

Across the six ICC Cricket World Cup fixtures, 9,471 guests received hospitality at Emirates Old Trafford, experiencing the thrilling games alongside quality food and drink. For the India vs Pakistan match on 16 June – which was the most-watched game in cricket history – special Halal and vegetarian menus were created for the teams’ supporters who travelled thousands of miles to watch their beloved cricket teams play.

Behind-the-scenes, the hospitality team – which consists of staff in front of house, kitchen, bar, VIP, ushering and administrative roles – worked thousands of hours collectively while the Manchester stadium has been at the centre of global sporting attention.

From transforming hotel rooms at the on-site Hilton Garden Inn into private suites, to coordinating the delivery of ingredients for thousands of covers per game, the team pulled together to deliver an outstanding experience for cricket fans who travelled up to 14,000 miles* for the tournament fixtures. The Emirates Old Trafford team also facilitated 562 off-site hospitality covers at Manchester United for the two biggest games at the ground – India v Pakistan and the Semi-Final (India v New Zealand) because the demand for tickets was so high. Off-site hospitality included a champagne reception with breakfast at Manchester United, followed by a Q&A with ex-players of the playing teams. Following the receptions, guests returned to their reserved premium stand tickets to soak up the excitement of the matches in the heart of the atmosphere.

Worldwide tournaments such as the ICC Cricket World Cup are synonymous with unprecedented media attendance and across the matches held at the stadium, 10,000 coffees were served to journalists from across the world while they relayed commentary back to their respective titles. Alongside this, 150,000 kg of biscuits were eaten by media with 1,500 meals served.

Catering for the unknown

Hosting an international sporting tournament of this magnitude has required over two years of planning and preparation by the Emirates Old Trafford team to ensure the smooth running of its services throughout every match.

However, on Tuesday 9 July, when India played New Zealand in the Semi-Final, the Club’s best-laid plans were put to the test. The match was rained off halfway through and rescheduled for the following day; a last-minute change of plan which required the team to co-ordinate with our suppliers and staff to ensure we were able to offer the high standard of service that our guests expect.

Angela Hodson, Head of Sales at Emirates Old Trafford, said: “The ICC Cricket World Cup has been an incredible opportunity for our hospitality team to showcase our offering under the spotlight of a global audience. This experience we provided was a huge step up from previous years in terms of the furniture, branding, interactive activities for guests and the authentic foods that we offered, and it’s fantastic to have welcomed so many guests.

“There has been a huge team effort and collaboration with everyone across the business to ensure this tournament was a success, and we have invested significant time and resource in training our teams to deliver an unparalleled experience. We know we have world-class facilities, and our hospitality offering has received incredibly positive feedback which will drive us forward ahead of the Ashes in September.”