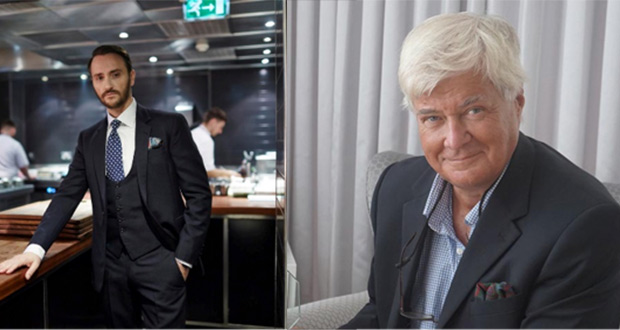 Atherton was named ‘Chef’s chef of the year’ for the development of his 18-strong The Social Company brand, and Sheppard was presented with a lifetime achievement award for his commitment to the hospitality industry over the last 50 years.

Having worked alongside industry greats including Pierre Koffmann, Marco Pierre White, Nico Ladenis and Ferran Adria at el Bulli, Atherton has become one of the UK’s most respected chefs.

Since leaving the Gordon Ramsay group and setting up his brand in 2010, he has built a global portfolio of restaurants, ranging from the highly acclaimed Pollen Street Social and 3-Rosette winners in London such as Social Eating House, and City Social in the Gherkin skyscraper; to destination dining venues in New York, Dubai, Shanghai and the Philippines.

Sheppard, who graduated from Oxford Brookes University in 1977, has developed and built numerous brands across the sector, including the establishment of the Bristol Hotel Group in 1998, followed by Furlong Hotels and in 2000. He co-founded Bespoke Hotels which has subsequently grown into the UK’s largest independent hotel group and now boasts over 200 properties spanning the length and breadth of the country and overseas.

Since being struck by the debilitating Guillain-Barre Syndrome in 2004, Sheppard has campaigned tirelessly for improved access for those with disabilities, including publishing his highly-successful book ‘A Solitary Confinement’, proceeds of which are given to GAIN, the UK charity offering support sufferers of Guillain-Barre. The book has sold over 45,000 copies to date.

They were joined by other leading figures from hotels, restaurants and pubs in England, Scotland, Wales and Northern Ireland to celebrate the twenty-second annual AA awards. Presented by Kate Silverton, the awards honoured the best establishments in the UK across twenty-three categories.

Commenting on his award, Jason Atherton said: “When you win Chef’s Chef of the Year it’s that award where the chefs vote you, so for me to be voted by my peers it’s just incredible. I was not expecting it, I’m absolutely thrilled to bits.”

Sheppard added: “I just got married, and it doesn’t get any better to spend the second night of your honeymoon winning a lifetime achievement award, so I’m thrilled to bits, astonished and just absolutely delighted.

“it has been a wonderful and joyous ride. This industry is fantastic and I’d always advise young people to get into the industry quickly. It can be such a wonderful and rewarding career and there are so many opportunities for those who want to get on.”