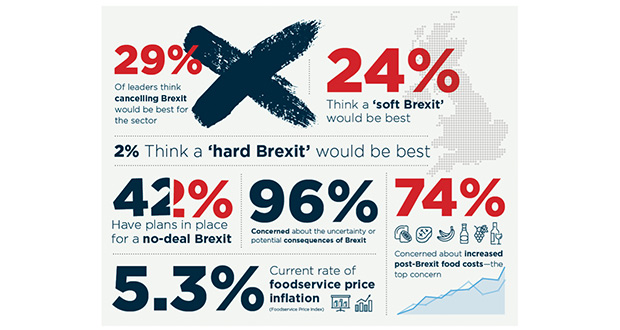 The majority of Britain’s pub, bar and restaurant bosses are clear they want to avoid a ‘no-deal’ or ‘hard’ Brexit – although a significant minority are now planning for that scenario.

As CGA has already reported, fears of a no-deal Brexit are denting confidence across the sector, with its impact on food and labour costs, as well as consumer confidence, the main causes for concern.

CGA’s latest Business Confidence Survey, produced in association with hospitality technology specialist Fourth, found that a mere 7% of business leaders thought that a ‘hard’ or ‘no deal’ exit from the EU would be good for the sector.

The results show the strength of feeling on Brexit across the market as the proposed departure date of 31 October nears, with 65% of leaders predicting leaving the EU would have a negative effect on their own business.

However, preparations are being made, including for a ‘no-deal’, but they are far from universal. The Business Confidence Survey reveals that 29% of bosses have not made plans for any Brexit scenario.

Across the market, 42% said they now had plans in place for a ‘no-deal’ outcome, with 29% having planned for a ‘hard’ Brexit. With workforce issues top of mind, 65% of leaders said that improving employee retention was their biggest challenge or major focus.

Over three-quarters (68%) said they would be upping training opportunities, with 48% looking to in-work perks and 46% increasing pay as ways to influence staff to stay.