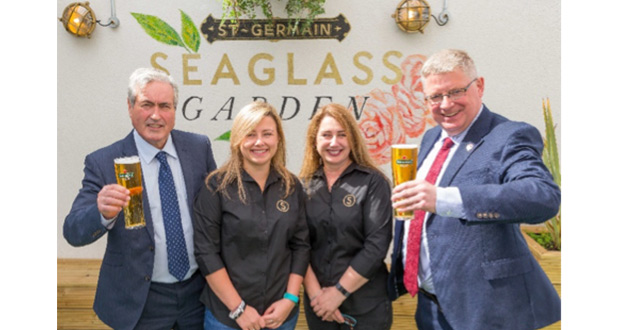 East Lothian MP Martin Whitfield and MSP Iain Gray visited The Seaglass Inn in Port Seton to toast the pub’s revival following a £425,000 refurbishment by Heineken-owned Star Pubs & Bars and new licensees, mother and daughter team Christine O’Brien and Sarah Couch. The development of the little-used, tired local – which was formerly called The Wemyss Hotel – has turned it into a quality, family friendly pub and created 16 new jobs.

The overhaul has given The Seaglass Inn a stylish contemporary look, created a stunning outdoor area for alfresco eating and drinking, added BT and Sky Sports and installed a kitchen. A new drinks selection ranging from barista coffee to craft beer and cocktails has been introduced, as well as freshly prepared food. Ingredients are locally sourced, and dishes include pub classics such as home-made steak pie as well as more unusual options such as pan-fried sea bass with salsa.

Christine – who grew up in Prestonpans and also runs The New Plough Inn at Tranent – says customers’ jaws drop when they walk in. “The pub looks beautiful, and they can’t believe the transformation. They love the new design and ambience and having a family-friendly pub that caters for all in Port Seton. We’re seeing a real mix of ages and people who never visited the pub before: groups of ladies for prosecco; guys watching the football and families enjoying a meal out. The community has backed us right from the early planning stages, and we’re very grateful for their support.”

Says MP for East Lothian Martin Whitfield: “It’s great to see such major investment in an East Lothian pub and new jobs created. The Seaglass Inn is a welcome addition to the area for local residents and another attraction for visitors to the county’s coast.”

Adds MSP for East Lothian Iain Gray: “Good pubs play an important social role as hubs for the communities they serve. With so many people moving into this part of East Lothian, it’s good news to see a local pub given a new lease of life.”

Comments Star Pubs & Bars area manager Jeremy Williams: “We’re delighted that The Seaglass Inn has been so well received and is proving a popular meeting place for the whole community and those from further afield. Christine and Sarah are passionate about giving Port Seton a pub it can be proud of, and we wish them every success.”