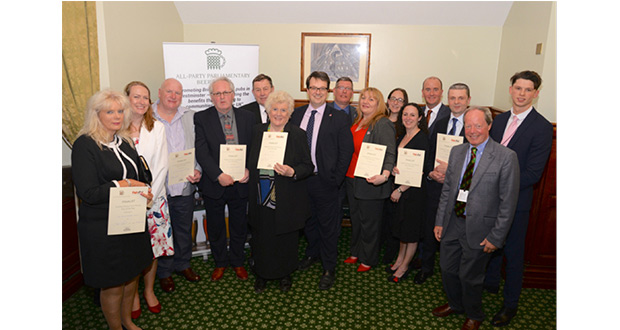 Entries have been judged and eight finalists selected in the Charity Pub of the Year Awards 2019, run by PubAid and the All-Party Parliamentary Beer Group (APPBG) and sponsored by Matthew Clark.

The competition, now in its second year, seeks to recognise those pubs who go the extra mile in their support of charities and good causes. This year’s contest attracted close to 100 entries from pubs across the country, with an extremely high standard that gave judges a near-impossible task in whittling the field down to just eight finalists.

The overall Charity Pub of the Year 2019 will be announced next month at the PubAid 10th Anniversary Celebration in London, from one of the following finalists:

Judges, drawn from across the pub industry, considered not just the sums of money raised by entrants, but also their contribution to their local community through a range of activities from organising litter picks to holding a regular club for adults with learning difficulties, or hosting Christmas Day dinner for homeless local people. Together, the finalists have supported hundreds of charities and good causes over the years, from large national charities to local groups and individuals, whom they have helped through difficult times.

Co-founder of PubAid, Des O’Flanagan said: “We’re delighted to be running this competition again, and are grateful to the involvement of Matthew Clark, whose support makes these awards possible.

“The entries underline the incredible support provided by pub teams and customers for charities and good causes. Pubs in the UK raise £100 million every year for charity and contribute a further £40 million to grassroots sport, making them a powerful force for good in their local communities and wider society.”

David Phillips, Managing Director, Matthew Clark, said: “Our thanks go to all the pubs who entered the Charity Pub of the Year Awards. We’re proud to be involved in these awards and to recognise pubs across the country who give their own time and resources to support their local communities. We look forward to announcing the winner next month.”

Mike Wood, MP for Dudley South and Chairman of the APPBG, said: “It has been truly humbling to learn about the amazing things that pubs do to support charities and local community groups.  We look forward to welcoming the shortlisted pubs to a celebration of their achievements next month.”