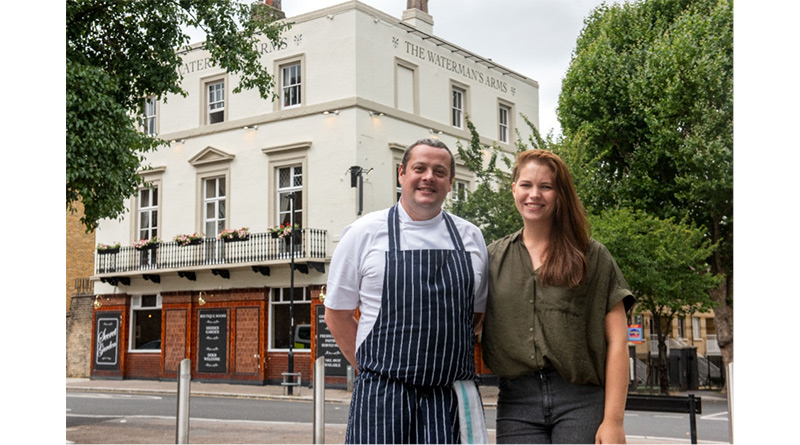 Laura Lythall and Sam Hawkes of The Ship Inn, Canary Wharf, have taken on their first Star Pubs & Bars lease, the former The Great Eastern on Glenaffric Avenue on the Isle of Dogs, which has reopened as The Waterman’s Arms, a name it had in its heydays in the ‘60s.

The pub has just undergone a major £587,000 refurbishment by Star Pubs & Bars and the new operators which has seen the wet-led grade 2 community pub and hostel transformed into a top-quality neighbourhood bar offering stand-out, food, drink and service.

The pub, which has been closed since mid-January, had been due to reopen in April when Covid halted work.   For now, just the pub is open with seven boutique style ensuite bedrooms scheduled to open in the autumn.

15 new jobs have been created on the back of the investment.

The partners who are highly selective about the venues they lease, plan to open five sites in the South East by 2030, where there is a gap in the market for their style of offer.

Owned in the 1960s by writer and broadcaster Dan Farson, who named it The Waterman’s Arms and ran it as an old-style music hall, it was in its heyday a magnet for well-known performers and was frequented by celebrities like Clint Eastwood, Judy Garland, Francis Bacon, Brian Epstein, and Shirley Bassey and went on to become a popular film and television location, used as the backdrop for The Long Good Friday, The Professionals and

They both have extensive hospitality experience. Sam was previously the head chef at The Botanist in Broadgate Circle as well as working at Opus Restaurant, The Bull and Last and the Jugged Hare. Laura, a former sommelier, has worked front of house at high profile restaurants, The Palomar and Hawksmoor and at the Michelin starred, Carters of Moseley.

The interior of The Waterman’s Arm has been opened up and the bar extended through the pub’s two main rooms, with a raised snug created at the back of the pub. Social distancing means 10 seats have had to be removed around the bar, leaving seating in the pub for 60.

Laura said: “We’re thrilled by the transformation at The Waterman’s Arms and to be open at last as it’s been 19 months from application to opening. I know The Waterman’s Arms of old, having grown up in the area. We have also run The Ship for the previous four years. So when we heard it was available to lease, we leapt at the opportunity as it has so much character, history and potential.

“It is time to put The Waterman’s Arms back on the map again. There’s a real need for a pub of this calibre on the Isle of Dogs. It stands out from other places to eat and drink in the area yet will be true to its roots and retain a neighbourhood pub ambience.

“Although we’ve opened during Covid times, we’re still able to source high quality local produce and the layout and staff training lend themselves to creating a warm and welcoming atmosphere.

“We’ve successfully re-opened The Ship following lockdown, which is a small pub. So we are really confident with our Covid safety procedures at The Waterman’s Arms. It is great to be able to offer customers somewhere else to go other than The Ship as numbers there are limited.”

Will Rice Star Pubs & Bars Regional Operations Director said: “Heralded as the Best Place to Live in London by the Sunday Times this year, The Isle of Dogs now has a top end pub to match.

“We’re delighted that Laura and Sam have taken on this landmark pub and wish them well with their plans for The Waterman’s Arms. They have a wealth of experience at top establishments, have run their own well-regarded local pub and know the area well. This investment takes The Waterman’s Arms to a new level and ensures it stands out from other pubs in the area.”