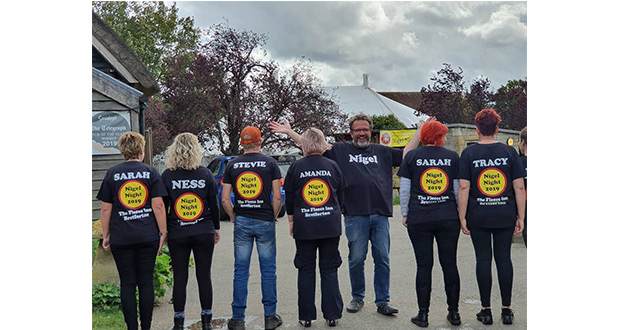 Over 400 people with the same name gathered at a pub over the weekend to ‘celebrate Nigelness’. The party at the Fleece Inn in Worcestershire, is believed to have set the record for the number of Nigel’s gathered in one place and it was organised by landlord Nigel Smith.

Nigel came up with the idea in 2016 after no newborns were called Nigel that year.In response a total of 432 Nigel’s from all over the world gathered together at the Fleece Inn, , for an evening of Nigel-themed refreshment and entertainment. Landlord Nigel was one of 5,000 Nigels born in 1963, however, there were no babies named Nigel in the 2017 National Statistics report.

He hopes he has done his bit to help put the name back on the map with his event in the village of Bretforton, which also raised money for the British Heart Foundation. He said: ‘I’ve always felt that the name’s much maligned – people would say to me when I was young ‘Nigel, that’s got to be a joke name hasn’t it?’ ‘So it was really just to get a few Nigel’s together in the same room, to share Nigel stories and celebrate our Nigelness – that was the original intention.’

Mr Smith said he believed Saturday’s event had broken a world record for a Nigel gathering by attracting Nigels from as far away as New Zealand and Texas.

He said a comedian called Nigel had been on the bill, “two Nigel singers and a woman even proposed to her boyfriend called Nigel on stage”.

Each Nigel, who signed “the book of Nigel” to verify the record bid, got a free drink and enjoyed a Nigel-based playlist and entertainment.

Congratulations Nigel Smith landlord of @TheFleeceInn #Bretforton #Worcestershire for organising the record breaking gathering of Nigels at #NigelNight this evening. People came from all over the UK and as far as Australia! pic.twitter.com/M6JvTqg7uF