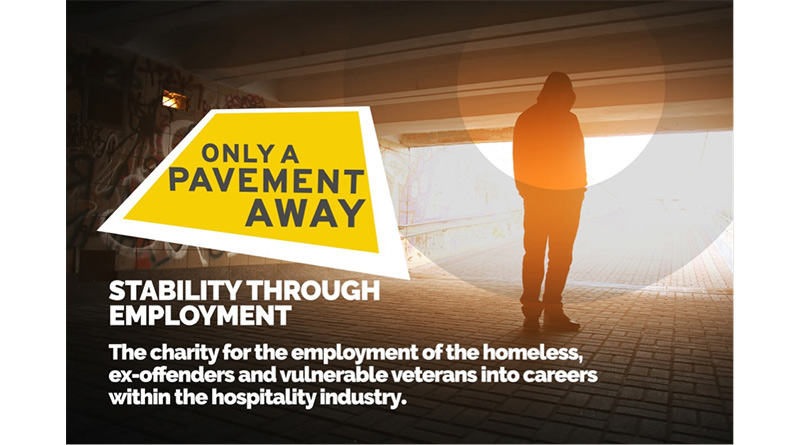 Hospitality charity Only A Pavement Away is delighted to announce it has distributed donations worth over £500,000 through its Hospitality Against Homelessness campaign since launching the initiative earlier this year at the height of the COVID-19 lockdown.

Fundraising highlights include the Tom Aikens Charity Cookery Challenge and a partnership with Bums On Seats, as well as the launch of the UK’s first charity jobs board geared specifically towards the hospitality sector.

Raising over £5,000 for the Hospitality Against Homelessness campaign, and with more than 200 participants having taken part, the Tom Aikens Charity Cookery Challenge has seen the involvement of high-profile chefs such as Judy Joo, Tom Kerridge, Paul Ainsworth and Jason Atherton. The challenge is simple; share a video of yourself cooking a five-minute meal on social media, donate £5 to the charity and nominate five friends to get involved too. A new cookbook featuring up to 180 recipes created during the challenge will be available from November 2020 in both miniature booklet and hardback formats with all proceeds going towards supporting both Only A Pavement Away members and non-members get back into work. Each Only A Pavement Away member will also receive a brochure sponsored by that contains 30 recipes from the challenge.

In recognition of his support for the charity, Tom Aikens was recently announced as an official ambassador for Only A Pavement Away and it has also been confirmed that he will attend the annual Cook and Dine 2021 event, set to take place in January next year.

This summer has also seen Only A Pavement introduce the first charity jobs board of its kind geared specifically towards the hospitality sector in association with Hospitality Jobs UK and Cue Media. Through the new Candidate Profile Page, launched on 21st July 2020, employer partners can review candidate profiles and shortlist them for interviews, before hiring through the charity. Celebrity chef Judy Joo and catering firm Thomas Franks have also signed up to be Only a Pavement Away Employer Partners with immediate effect.

Further strengthening its ties to leading hospitality organisations, Only A Pavement recently announced a partnership with Bums On Seats, the UK’s largest outsource sales agency for the hospitality industry, with 5% of every delegate place sold on the new Bums On Seats M.I.R.A.C.L.E Sale foundation course going towards to the charity.

Founder of Only A Pavement Away, Greg Mangham said: “The last few months have proved to be some of the most difficult in living memory for everyone involved in hospitality and it has been extremely tough to see so many of our people fall into unemployment and economic hardship as the lockdown measures begin to bite. I am eternally grateful for the all support that we have been shown during this time from hospitality leaders and celebrity chefs to the Great British public whose enthusiasm for our work and generous donations have enabled us to help so many individuals during this testing time.

Greg added, “It has been incredible to see the Hospitality Against Homelessness campaign and Tom Aikens Charity Cookery Challenge gain so much traction and foster such a strong sense of community across the UK. Since launching Hospitality Against Homelessness back in April we have been overwhelmed by the number of donations we have received from our friends at the likes of the Athenaeum Hotel, Thomas Franks, Yummy Pub Co., Mandarin Oriental & Pasta Remoli which have numbered over £500k and helped to feed hundreds of individuals who were falling into destitution across London. A truly amazing achievement that wouldn’t have been possible without our ‘procurement king’ Paul Pavli who has overseen the procurement & logistics for all the donations we have received! We can’t wait to celebrate everyone’s contribution to the Charity Cookery Challenge in the new cookbook this autumn too and we are thrilled to have now raised enough money to distribute 3,000 flasks of water to homeless individuals in London and Brighton this month thanks to support shown to us from Greene King and Thomas Franks.”

Tom Aikens said: “Since collaborating with Only A Pavement Away at the start of the lockdown period, it has been brilliant to watch the Charity Cookery Challenge evolve and see just how popular it has become with both industry figures and the wider public. I am delighted that we have so far raised over £5,000 and I can’t wait for the finished cookbook to go on sale in the coming months. Our industry has taken a real hit this year and every penny that we raise makes a huge difference to the lives of every hospitality worker who has been struggling at this time.”