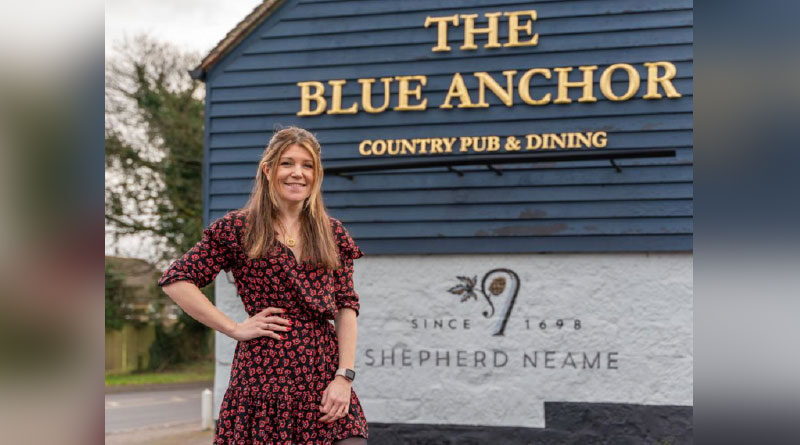 Shepherd Neame pub the Blue Anchor at Crowborough has been named Pub of the Year at an annual tourism awards ceremony for the second year running.

The popular pub and restaurant in Beacon Road, Crowborough, scooped the accolade at the Beautiful South Tourism Awards at a ceremony held at The Grand in Brighton on Monday, April 25.

It was judged on everything from its appearance and service, to its food; online reviews by customers, and use of social media to promote its offering and the area.

Licensee Amy Glenie, who has been at the helm for four years, said it was totally unexpected to have received the honour for a second year.
She said: “It is amazing and just so unexpected – especially because it is the second year in a row. It was just such a big surprise. “

She added: “With everything that has been going on, it’s so good for the team to be rewarded like this. It brings everybody together after a couple of really tough years.”

The awards evening was attended by Amy and her husband, as well as her mum Nicola, who is a chef, and her management team.

Amy said: “My mum helped me so much when I started out, helping in the kitchen, so it felt fitting she should come. It was a lot of work to get us to where we are but it was a team effort and now I have a brilliant and stable team in place.
“And in the area where we are, we have such lovely customers who are so supportive.”

The historic pub – once a haunt for smugglers and poachers in the 18th century – prides itself on fine, freshly-made food using locally-sourced produce where possible and also has a spacious garden and patio, perfect for alfresco drinking and dining.

This year’s trophy is now in pride of place in the pub’s entrance, along with last year’s award, so that customers can see it as they arrive.