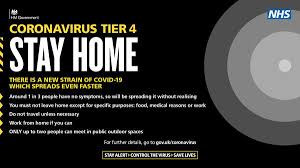 Over 75% of England will be placed into Tier 4 from midnight tonight (December 30) after a huge surge in coronavirus infections prompted the government into announcing further restrictions.

Vast parts of the country including the Midlands, North East, parts of the North West and parts of the South West will enter the toughest restrictions from 12.01am on New Year’s Eve, health secretary Matt Hancock announced, which will result in 44.1million people or 78% of England placed in Tier 4, paralleling the rules in the November lockdown. Another 12.2 million (22%) will be in Tier 3, which will force pubs and restaurants to close to the public, offering takeaway only.

Addressing the House of Commons Mr Hancock said: ‘Almost all of the country are going to be in Tiers 3 and 4. I am afraid it is absolutely necessary because of the numbers we have seen.’

Referring to rapidly increasing infections attributed to a variant strain of Covid, Mr Hancock said: ‘Sharply rising cases and the hospitalisations that follow demonstrate the need to act where the virus is spreading.’

He said the majority of new cases recorded yesterday ‘are believed to be the new variant’.

Mr Hancock added: ‘Unfortunately, this new variant is now spreading across most of England and cases are doubling fast.

‘It is therefore necessary to apply Tier 4 measures to a wider area, including the remaining parts of the South East, as well as large parts of the Midlands, the North West, the North East and the South West.’

Mr Hancock said almost all the country will be under the top two brackets.

“Even in most areas not moving into Tier 4, cases are rising too, and it is therefore necessary to apply Tier 3 measures more broadly too – including in Liverpool and North Yorkshire,’ he said.

“The rest of Yorkshire remains in Tier 3. These changes will take effect from 00:01 tomorrow morning.

“The new variant means that three quarters of the population are now going to be in Tier 4 and almost all of the country in Tiers 3 and 4.

“And I know that Tier 3 and 4 measures place a significant burden on people, and especially on businesses affected, but I am afraid it is absolutely necessary because of the number of cases that we’ve seen.’

Shadow Health Secretary Jon Ashworth told the Commons: “This is a national emergency. Our NHS is becoming overwhelmed.

The areas joining tier 4 from New Years Eve are:

The areas joining tier 3 are: