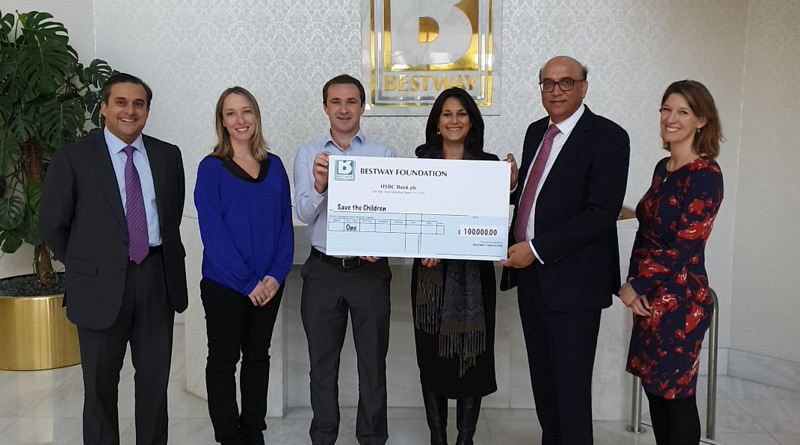 The funds were raised through Bestway’s annual Ascot Charity Race Day held in the summer which was attended by over 800 people this year and is one of Ascot’s biggest corporate events.

Over 20 charities have benefited from funds raised through the event since it began in 1994, including Save the Children who first became associated with the Bestway Foundation as the chosen charity in 2004. Save the Children was chosen for a second time this year in recognition of the support the fund provides to children in need of education, health care and economic opportunities across the Globe.

Save the Children’s Partnerships & Philanthropy Director Sayyeda Salam commented on the donation: “We are incredibly grateful that Save the Children was chosen as the beneficiary for Bestway’s 2019 Royal Ascot Charity Race Day. It was a huge honour to be invited to be part of this prestigious event for the second time marking Save the Children’s 100th year. Thanks to the generosity of Bestway and their guests the day resulted in an amazing donation of £100,000 that will make a real difference to help us support children in the greatest need both in the UK and globally across education, healthcare and disaster relief. We look forward to further building our partnership with Bestway.”

Since 1987, Bestway Group has donated in excess of £14.8M to Bestway Foundation in the UK.  Each year the company hosts a charity race day at Ascot to raise funds for charity and this event is now in its 27th year. The event was attended by 800 of Bestway’s suppliers, employees, trade press and members of Save the Children; the benefiting charity.

Lord Choudrey added: “We are delighted to support the work of Save the Children for the second time – made even more special by the fact it’s the charities big 100th year anniversary this year. The Annual Ascot Charity Race Day is just one of the ways that Bestway Foundation gives back to people in need and we are very grateful to our supplier partners and colleagues for supporting this annual event and donating generously to ticket purchases, the Charity Auction, Tombola and other fundraising activities back in June.”

The donation of £100,000 will enable Save the Children to support almost 400 children and their parents living in poverty in the UK, by providing the tools to help their learning at home, which they simply can’t afford. This includes educational toys, books, essentials, such as a table or a bed and advice and guidance for parents to engage in their child’s learning.