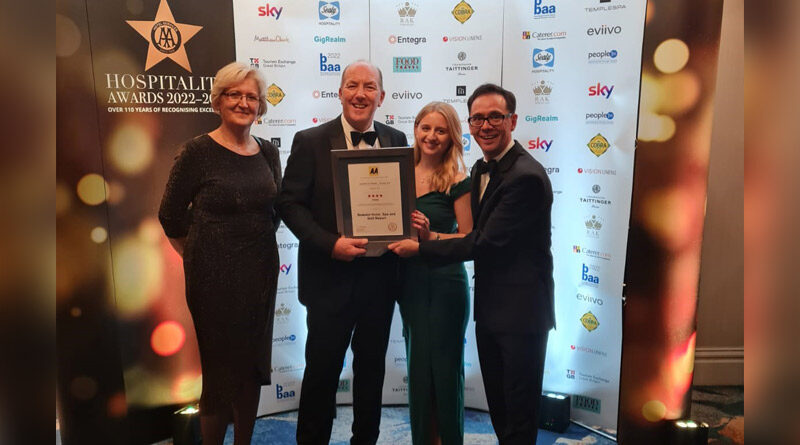 A Wiltshire hotel has been awarded coveted four Red Star status by the AA – with the assessors’ annual release of its hospitality standards recognising it as ‘Inspectors’ Choice’, which sees it rated as one of the best hotels in the British Isles.

Bowood Hotel, Spa and Golf Resort, which sits at the heart of the 2,000-acre Bowood Estate, has been awarded highly sought-after four AA Red Star accreditation, with inspectors noting the excellent level of quality on offer and the outstanding hospitality and service.

Previously assessed as a four silver star hotel, the latest assessment saw this rating retained, but with the recommendation that it be noted as Inspector’s Choice ‘Red Star’ status – a mark of excellence that serves to set it apart from other four-star rated hotels.

The AA has been recognising and rewarding accommodation since 1908, with its star rating introduced in 1912 to help guests more easily determine the quality of a hotel’s services and facilities. Assessing more than 4,000 hotels across Britain & Ireland, the AA’s unique Merit Score provides consumers with a means of comparing hotels with the same star rating – enabling them to appreciate the features that set a hotel apart from its competitors.

Alongside its principal hotel offering, Bowood’s amenities include its two AA Rosette Shelburne Restaurant, its luxurious The Spa at Bowood, and its renowned golf course, which is the official PGA golf course & academy for the South West.

As part of the accreditation process, the AA inspector assessed three key elements: overall quality, critical areas (cleanliness, hospitality, service, bedrooms, bathrooms and food), and the provision of service & facilities. To achieve a four Red Star rating, each element must meet the requisite standards, with Bowood achieving five for overall quality – something that highlighted the exceptional nature of the hotel’s offering and provided the platform for its Red Star recognition.

Jeff Condliffe, General Manager at Bowood Hotel, commented, saying: “I am extremely proud and delighted to receive the AA Red Star accolade. This is an incredible achievement for us, and in particular recognises the hard work and commitment of the entire team at Bowood who continually strive to exceed expectations and offer the highest possible levels of service.”

“My focus has been implementing the relevant changes that would allow us to achieve Red Star recognition. Bowood is a wonderful hotel with enormous potential, and to see it realised is incredibly rewarding, but it’s a genuinely deserved accolade that’s only possible thanks to our exceptional team – of whom I’m very proud to be a part!”