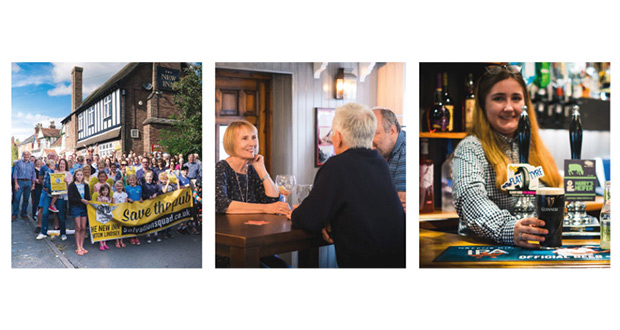 ACROSS the UK more shops and pubs than ever are now in community ownership and are bucking the national trend of rural closures.

By the end of 2018 there were nearly 100 community pubs trading across the UK – with 11 opening in the previous year alone. Meanwhile 16 new community owned and run shops started trading – bringing the national total to over 360.

Community pubs have a 100% record of survival with none having ceased trading since records began. Around £3.5 million was raised by 11 newly opened community pubs in 2018. Community shop numbers also increased by 16 nationally in 2018 bringing the total to 363 open for business boasting a volunteer workforce around six to seven thousand nationally. The survival rate of community shops is 94%, compared with an estimated long term survival rate for all small UK businesses of 44.1% (Source: Office for National Statistics).

The figures are published in The Better form of Business reports produced by the Plunkett Foundation – an organisation which supports rural communities across the UK to tackle the issues they face through community business. The reports were funded by Power to Change, the independent trust supporting community businesses in England.

James Alcock, Executive Director of the Plunkett Foundation, said: “These figures come out at a time at which we are seeing real challenges to rural communities with widespread closures of pubs and the loss of rural shops.

“The reports show that community businesses are often the answer to these challenges – and it is heart-warming to see the quite remarkable continued success of the community business model. For pubs we can see an extraordinary one hundred per cent survival rate. At the same time the Plunkett Foundation reports show community shops have a healthy rate of growth.

“Both pubs and shops in rural areas can be a lifeline to the people they serve. The issues of isolation and loss of amenities are well known – and the reports show that community businesses do so much more than just being a pub or a shop as they tackle these issues. Community businesses are breathing new life into rural communities across the UK.”

Community shops are now offering a range of services including training and employment opportunities, whilst continuing in their core role of selling often locally sourced produce. Across the UK community pubs are hosting a whole kaleidoscope of events – from music performances to pop-up cinemas and poetry readings to meeting rooms as well as serving their community with traditional pub pastimes such as pool, snooker and darts.

Vidhya Alakeson, Chief Executive at Power to Change, said: “Community shops and pubs are very often a lifeline for the people they serve. Like all community businesses, they offer tangible benefits to the community through anything from lunch clubs, free space for community groups, training and volunteering. I am delighted at the success of community pubs and shops outlined in these reports, particularly in the face of an incredibly tough economic conditions.”

The key findings of the reports:

Community Pubs – A Better form of Business 2019
In 2018:
• The community pub sector grew by 13% with 11 new pubs opening during the year
• 95 known community pubs in total were trading across the UK at the end of 2018
• 148 new enquiries to the Plunkett Foundation were received from communities exploring community pub ownership
• Approximately £3.5 million was raised by 11 newly opening community pubs
• The average cost of purchasing a community pub during 2018 was £337,300
• Over half of all capital required from the start-ups was sourced from community shares
• No community pubs ceased trading, maintaining a 100% survival rate