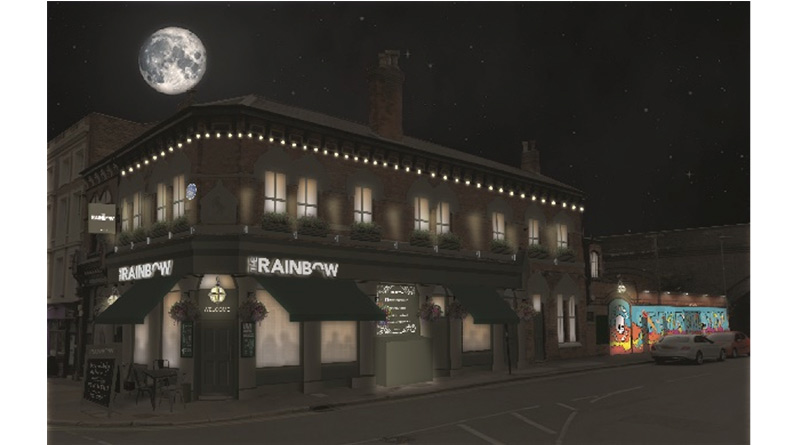 Building work starts next week on a major transformation of The Rainbow pub in Digbeth, renowned both for its association with the original Peaky Blinders in the 1890s and as catalyst for Digbeth’s transformation into a creative quarter. The £750,000 investment by Heineken owned Star Pubs & Bars and new local operators Nick Rendall and Trevean Anderson will see the pub, which has been closed for the last four years, transformed into a live entertainment driven events venue.

The Rainbow will reopen in the summer once restrictions are lifted, creating 30 new jobs.

Larger than other pubs in the area, the plan is to reinstate The Rainbow as the leading live music pub in Digbeth. It will be a place to drop in for a quick drink and bite to eat before moving on or to spend the whole night enjoying cocktails, live music, and dancing until the early morning.

Funds are being spent creating an atmospheric bar and dance area in the basement with a raised stage for gigs and a new state-of-art sound system. On the ground floor there will be a cocktail bar and lounge with a mix of booth and loose seating and a more Victorian look and feel.

The Rainbow is Nick and Trevean’s second pub. Their other is The Cuban Embassy in Moseley (formerly The Bull’s Head), which was inspired by Nick’s travels in Cuba and passion for rum, live music and good food.

Says Nick: “I know The Rainbow pub of old, and like many others was a regular back when it first opened as a live music venue around 2003. So, I leapt at the opportunity to take on the lease and reinstate it as Digbeth’s leading music pub. We have got a great team to help us achieve this goal. Jimmy Shaban, who previously ran The Victoria in the city centre, another entertainment driven live music pub, is the new General Manager. Lisa Travis, who has been involved in the music industry all her life and was manager of The Prince of Wales in Cambridge Street, will be doing all our live bookings. We can’t wait to open the doors and breathe life back into The Rainbow. It has fallen on hard times in recent years and now needs some TLC.”

Says Paul Linton, Regional Operations Director, Star Pubs & Bars: “We’re delighted Nick and Trevean have taken on The Rainbow and wish them well with their plans. They know the pub, the area, and the local music scene well and have a track record of turning around underperforming pubs. The Rainbow will I am sure be as great a success as their other pub, the highly rated Cuban Embassy.”