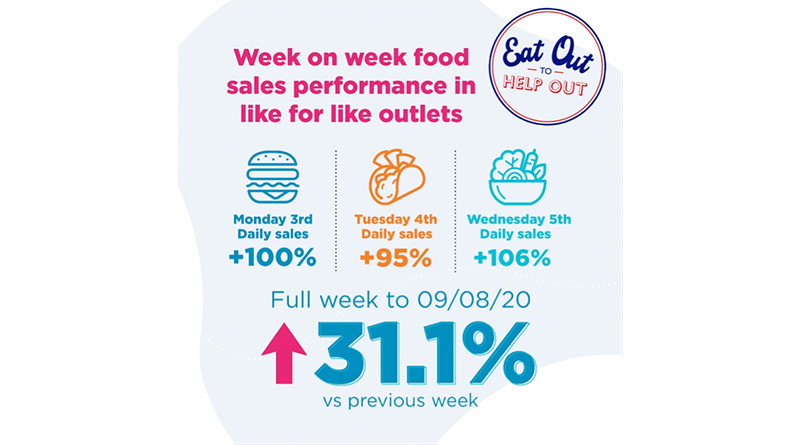 The Eat Out to Help Out initiative is bringing consumers back to into pubs and restaurants—and is giving casual dining chains in particular, a much-needed lift.

Food sales in Britain’s managed pubs and group restaurants rose by a third week-on- week in the first week of the government’s Eat Out to Help Out scheme, according to data from CGA’s Volume Pool of 7,000 managed outlets.

On the first day of the initiative, Monday 3 August, the data shows food sales through pubs and restaurants were 100% up on the previous Monday (27 July), with similar surges of 95% and 106% on Tuesday and Wednesday (4 and 5 August).

This follows news from the government that diners used the scheme more than 10.5 million times in the first week.

With the Eat Out to Help Out deal only available from Mondays to Wednesdays, there was some uncertainty over whether it will benefit trade later in the week. CGA’s data shows that following the first three days of the scheme sales on Thursday were down 4% week-on-week but across the seven days to last Sunday (9th August) there was a 31% rise in food sales week-on-week.

The halo effect of the scheme has also boosted sales of soft drinks, according to the latest Drinks Recovery Tracker, with soft drink sales up 30% on the previous year on the Wednesday of the Eat Out to Help Out Scheme. 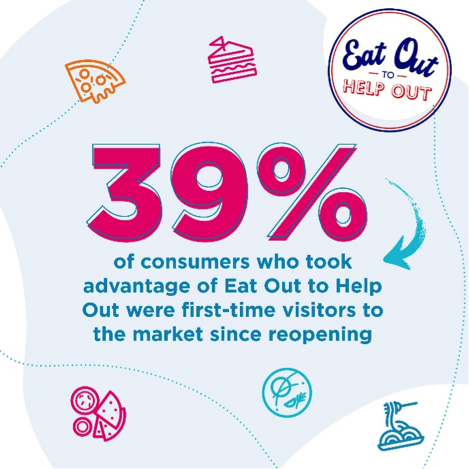 CGA’s most recent Consumer Pulse survey supports these trends. It reveals that the initiative has brought consumers back to eating out—with just over a quarter (27%) of British adults having used the scheme by Tuesday (11 August). Even more (31%) said they had yet to use it but are likely to do so before the end of August.

Crucially, the scheme appears to have achieved the sector’s hope of bringing back people who were previously hesitant about eating out. Two in five (39%) of those who have used Eat Out to Help Out were making their first visit to the sector since the end of lockdown. Of those who are still to eat or drink out, a quarter (26%) said they are likely to make use of the scheme before it ends.

Some of the consumers brought back by the initiative will have been anxious about safety—but they seem to have been reassured. Half (52%) said that the experience made them feel more confident about going out in the near future, and most of the rest (45%) said their confidence was unaffected.

There are strong signs that the scheme will gather momentum in the second half of August. More than half (57%) of consumers who plan to use it said they would do so at least weekly, and only 17% said they would use it only once. 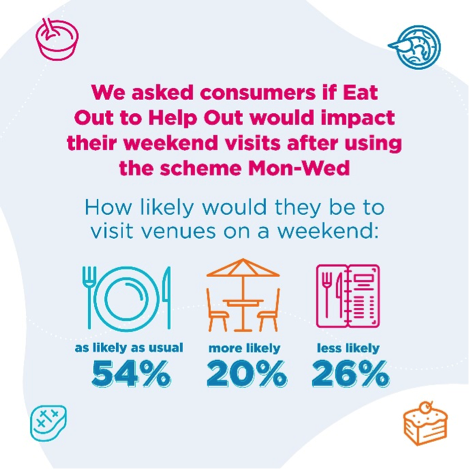 The survey shows that a quarter (26%) of adults would be less likely to eat out at weekends having made use of the Eat Out to Help Out scheme—but half (54%) said their frequency would be unaffected, and a fifth (20%) would be more likely to eat out.

The Eat Out to Help Out scheme is bringing a fresh wave of consumers back to restaurants and pubs,” says Rachel Weller, CGA’s Head of Consumer Research and Marketing. “Positive word of mouth and fear of missing out on the offer will hopefully tempt even more people back in the next two weeks. There is still a lot of work to be done, but if operators can leverage this huge interest to persuade people back later in the week and into September, this will have been a big step along the road to recovery.”

The Coffer Peach Business Tracker supports these consumer results, revealing that the scheme has helped boost casual dining chains in particular. Managed restaurant groups saw sales rise 52% week-on-week—and on a like-for-like basis, they were 8% higher than in the same week in 2019. Pub restaurants’ sales climbed 36% week-on-week, and drink-led pubs (up 8%) and bars (up 19%) appear to have felt the benefit of increased footfall too.

Across the Tracker’s cohort of managed restaurant, pub and bar groups, total sales were up 30% on the previous seven days, while like-for-like sales were just 7% down on the same week in 2019. Eat Out to Help Out has also incentivised some operators to reopen more sites, with four in five (79%) venues in the Tracker cohort trading last week.

Our data shows the Eat Out to Help Out scheme is having the desired effect of boosting food sales for restaurants, pubs and others at a time when they need it most,” said Karl Chessell, Business Unit Director for Food and Retail at CGA.

“Along with operators’ stringent hygiene precautions, it is encouraging consumers to venture out and see that they can have a safe as well as good value meal out. As the scheme goes on it will hopefully begin to have a positive impact on footfall on other days of the week too—though it is already clear that the sector will need sustained support from government after the scheme ends at the end of the month.”