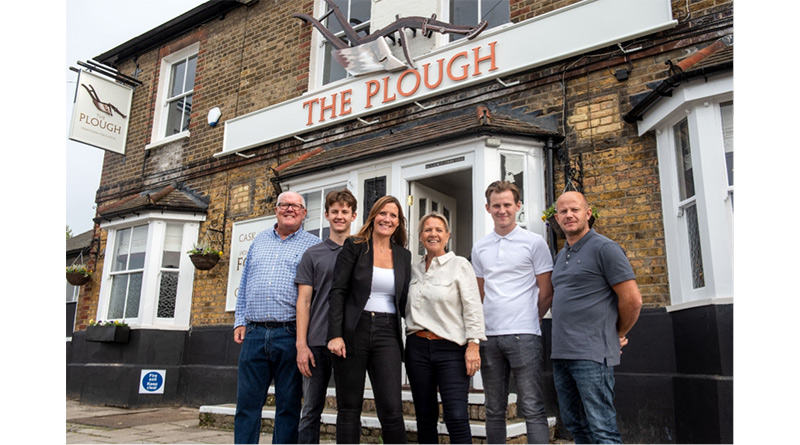 A Dartford family is set to open their third pub in the town following a £260,000 revamp with Heineken-owned Star Pubs & Bars.

Three generations of the same family will be involved in running The Plough at Wilmington when it opens its doors on Friday 9th October. The team includes: David and Dilys Clack, who operate The Dart on Chastilian Road and top-rated Trip Advisor pub The Chequers in Darenth; their daughter and son-in-law Nicola and Chris Tume, and the Clacks’ two grandchildren, 20-year-old Billy and 18-year-old Freddy Tume. A further 15 jobs have also been created.

The opening was originally scheduled for May Bank Holiday but has been delayed by disruption to the building work caused by lockdown. The refurbishment has transformed the previously dated pub into a great quality local serving freshly prepared home-cooked food.

Having worked at her parents’ pubs for many years, Nicola is taking centre stage at The Plough as its new licensee. Says Nicola: “I jumped at the chance to take on The Plough – it’s a dream come true to have a pub of my own. It’s a beautiful building with bags of character but was in need of TLC and investment to give customers the comfort and quality they deserve. It looks amazing now, and we can’t wait to show people their new-look local.

“I’ve worked with my parents since I was a teenager. It’s fantastic to have their support at The Plough and to be keeping up a family tradition by having my children involved, too.”

Adds Nicola: “At difficult times like this, a good local is more important than ever to the community it serves. People are travelling less and working from home more, so we want to give them a great pub they can enjoy on their doorsteps. Residents have been incredibly supportive of the refurbishment. The Plough has been closed for more than six months now and they’re desperate for it to re-open. We’re excited to be finally opening and look forward to welcoming them back.”

Comments Dugald Macer, Star Pubs & Bars operations director for Kent: “Nicola and her family have a great track record of creating outstanding pubs in Dartford. They’ve got brilliant local knowledge and understand what residents want. Under their stewardship, The Plough looks set to be another asset for the area.”