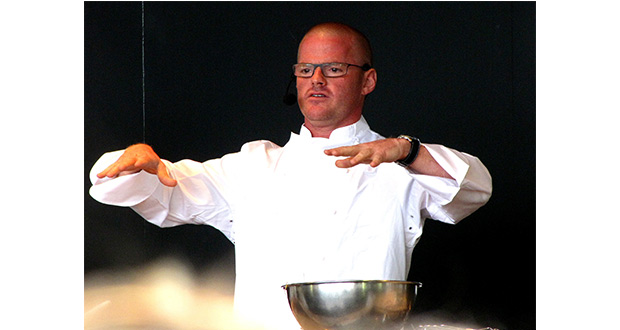 Patissier Sharon Anderson worked at The Fat Duck from June 2014 to November 2015 and claims that the delicate tasks she was required to perform during this time have left her with chronic wrist pain.

Mrs. Anderson from Letterkenny, Co. Donegal, Ireland, said she was pushed too hard while helping to make the eccentric and chic creations that made the restaurant world-famous and won it three Michelin stars.

Her duties included putting 400 sweets a day in small bags with tweezers, racing against the time to make chocolate playing cards before the chocolate got too hard, and administering hundreds of small fingertips to mushroom stems.

In her case, she detailed what her working day involved. Anderson says that between 7am and 11am, she was required to use tweezers to individually pack 400 wrapped sweets into cellophane bags, before making chocolate playing cards from 11.30am to 4pm. Finally, she claims she would need to make close to 550 whisky wine gums between the hours of 4-6pm.

The chef’s case clarifies that when making the chocolate playing cards (a Fat Duck signature), she would have to hold a mould in her left hand which weighed around two kilos and that she was making around 180 cards per day.

The Fat Duck denies the allegations and points out that Ms Anderson was transferred to lighter duties after she complained about making chocolate patisserie.

They also claim her workload was not oppressive and she was given adequate support. The restaurant is also arguing that Ms Anderson’s compensation claim was filed too late.

The case is due to return to court next year.