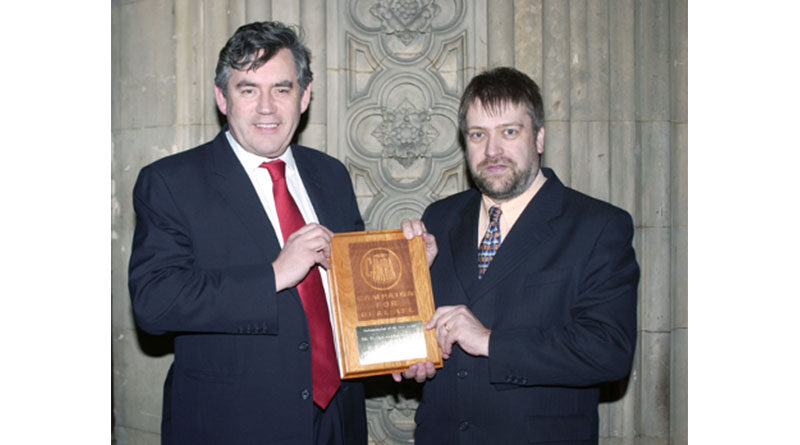 Gordon Brown and Sadiq Khan have been included in a prestigious awards list produced by the Campaign for Real Ale (CAMRA), which recognises people who have made a significant contribution to the beer and pubs industry during its half a century of campaigning.

The ‘People Awards’ form part of CAMRA’s Golden Awards celebrations to mark the Campaign’s 50th anniversary and celebrates nearly 70 individuals who have made the beer and cider world what it is today. Previous categories announced covered the ‘Pubs’ and ‘Pints’ winners and were announced last year.

The former Chancellor of the Exchequer Gordon Brown made the list for introducing Small Brewers’ Relief in 2002, which created a huge boom in small and independent brewing in the UK and consequently greatly increased the diversity of beers on the market for consumers. Small brewers continue to be the backbone of the UK’s thriving beer scene, but still face serious issues when it comes to market access.

CAMRA continues to campaign for greater support of small brewers, particularly in the aftermath of the alcohol duty reforms last year which introduced a draught beer duty rate that unfortunately excludes many small brewers who sell their beer directly to pubs.

Another familiar face on the list is Sadiq Khan, who is recognised for introducing in London one of the most comprehensive pub protection policies across the UK. Unfortunately, not all nations and regions benefit from similar pub protective measures. CAMRA continues to urge the Welsh Government to carry out their promised review of planning use classes this year to give pubs better protections in the planning system, and for the Scottish Government to take action to prevent pubs being demolished without planning permission.

68 individuals in total have been recognised, each of whom has been nominated directly by CAMRA members. Other notable recipients include Paul Jones, MD of Cloudwater, James Finch, aka The Cider Critic, Annabel Smith, Beer Sommelier, and Cath Potter and Dick Withecombe, founders of Manchester Cider Club.

Chris Rouse, Awards Organiser says: “CAMRA’s Golden Awards aim to highlight the significant changes that have taken place in the beer and pub world over the last 50 years and to celebrate the people, pubs, clubs, breweries and cider producers who have driven those changes.

“Huge congratulations are owed to everyone who has made this list. Whether they be notable politicians or a dedicated local CAMRA volunteer, every recipient has been chosen for their hard work, dedication and passion in ensuring great consumer choice at the pump.”