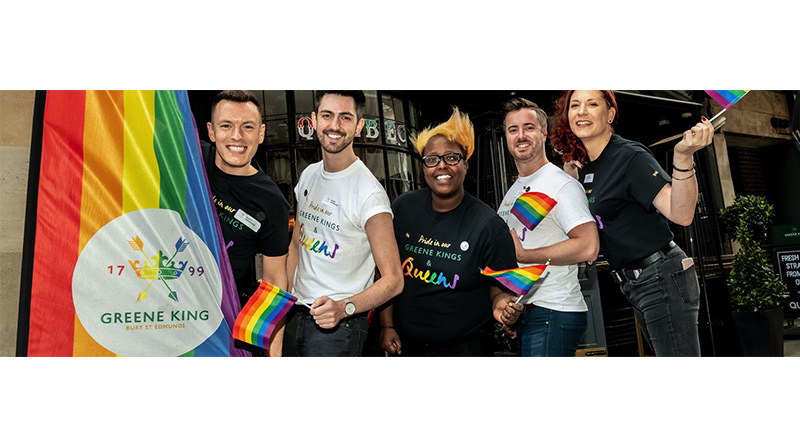 Greene King the UK’s leading managed pub company and brewer, has revealed its plans for this year’s Pride month, the annual celebration of the LGBT+ community, by hosting several virtual events for both team members and customers to participate in.

Between 24th – 26th June there will be a Pride-themed takeover of Greene King’s virtual pub The Lock Inn, with that week’s events – consisting of a pub quiz on a Wednesday and Rock ‘n’ Roll Bingo on a Friday – centred around celebrating LGBT+ culture, as well as fundraising for LGBT+ charity Switchboard and UK Black Pride.

In addition to the Lock Inn events, Greene King has partnered with Absolut Vodka to host an exclusive virtual cocktail masterclass on Thursday 25th June, which will be broadcast live from the City of Quebec, thought to be London’s oldest LGBT+ friendly pub. Tickets are priced at £15, which includes postage of a cocktail making kit with the required ingredients to make two cocktails at home during the masterclass. All funds raised from the ticket sales will be donated to Switchboard and UK Black Pride.

Karen Bosher, managing director for Greene King Premium, Urban and Venture pubs and executive board sponsor for Greene King’s LGBT+ network The Village Greene, said: “We are extremely proud of our diverse workforce and whilst we are disappointed that we’re not able to proceed with the Pride events we had planned for 2020, it remains nonetheless important that we continue to show our support and commitment to LGBT+ equality.”

Greene King’s LGBT+ network The Village Greene celebrated its first anniversary last month, and since it was launched in May 2019 more than 700 team members from across the country have joined the network, supported by eight committee members. The Village Greene has also hosted events in London, Leeds and Birmingham over the last 12 months for network members.

Tickets for the cocktail masterclass with Absolut Vodka are on sale until Wednesday17th June and can be purchased from Eventbrite.

To find out more about Greene King’s Pride events and to donate to Switchboard and UK Black Pride, visit: https://www.justgiving.com/fundraising/gkpridemonth