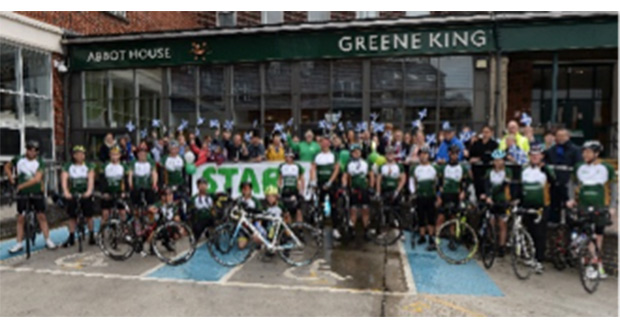 19 Greene King team members set out on a gruelling 420 mile ‘Ultimate Brewery Tour’ bike ride to raise funds for Macmillan Cancer Support earlier this month. Starting from the UK’s leading pub company and brewer’s head office in Bury St Edmunds, the ride will snake northwards, with stops in York and Newcastle, before finally arriving at its Belhaven Brewery on the east coast of Scotland four days later.

The challenge has been created by Greene King to raise vital funds for Macmillan and also celebrate Belhaven Brewery’s 300th birthday.

Jeff Addison, financial director at Greene King, is taking on the challenge after his own cancer experience and said: “Cancer wasn’t something I expected to get and only after being diagnosed did it sink in that we are all at risk. Having been through the cancer journey and lucky enough to recover from it, I want to give something back, whether that be through raising funds towards prevention and care, promoting awareness of symptoms or talking to people about the journey, I think it’s important that everyone is given support when they need it. This will be the third cycle ride challenge I have completed in two months to support Macmillan and cycling 420 miles in four days will be a physical challenge, but if the funds we raise make a difference for people battling cancer, it’s worth it!”

Nick Mackenzie, chief executive at Greene King said: “I’m so proud of the team for taking on this challenge, 420 miles in four days is going to be pretty relentless. While I’m sure there will be testing times during the ride, the team has a great spirit and I know they’ll support each other. Our employees across the country take on all sorts of fundraising challenges for Macmillan but this is unique and special – cycling from our brewery in Bury St Edmunds to our brewery in Dunbar. I look forward raising a glass of our beer and congratulating them on their success.”

Rachel Gascoigne, partnership manager at Macmillan Cancer Support said: “We’re so proud of the Greene King team members taking on this challenge for Macmillan. We rely almost entirely on public donations, so the amazing fundraising efforts of Greene King make a huge difference to people living with cancer. I look forward to seeing all the cyclists enjoying a well-earned rest up in Belhaven!”

Greene King has been working in partnership with Macmillan since 2012, and has raised a staggering £6 million through fundraising activities by team members as well as customer contributions.

The money that Greene King raises helps Macmillan to fund a variety of cancer-care professionals. This includes nurses, dietitians and physiotherapists, who help people make sense of their diagnosis and ensure they get the physical and emotional support they need. In addition, this year’s annual ‘Macmillan May’ fundraising push raised over £700,000 for Macmillan grants, one off payments to help people cope with the financial impact of cancer.