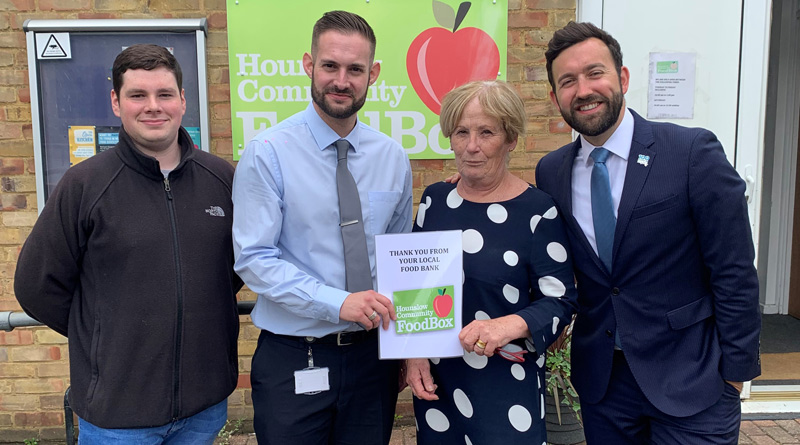 Team members at a leading London hotel are reaching new levels of customer service, thanks to their support for a local food bank.

Hilton London Heathrow Airport has been praised by the staff at Hounslow Food Box for the hotel’s on-going support of the charity, by providing them with much needed essentials to help families in need.

And project advisor, Oonah Lacey, said along with food items, bedding and toiletries, staff have also given their time to helping the organisation.

“The support from the hotel has been absolutely fantastic, they are an absolute pleasure to work with,” said Oonah.

“They have done so much for the local community and have helped us help lots of people over the past few years.”

Hounslow was a pilot area for Universal Credit, which, according to Oonah, meant that people experienced difficulties with the system far earlier than other parts of the country.

“We suddenly found that from helping 5000 people we were suddenly dealing with 15,000, which is why the support of our corporate partners is so important,” she said.

Hotel team members have fund-raised to buy items for the charity and are currently embarking on a campaign asking staff to donate hats and gloves which can be given out by Food Box to people during the winter months.

They have also donated to the charity pillows and duvets which are no longer being used at the hotel, as well as providing personal hygiene products which many people don’t have the income to buy.

At the same time the hotel has provided Food Box with recipes to give to its users, so they can create tasty meals out of the ingredients that are given out.

David Clarke, HR Manager at the hotel, has been co-ordinating the activities and said the team was delighted to be able to support such a great cause.

“At Hilton London Heathrow, we are very much part of the local community and it’s important for us to help that community if we can,” he said.

“We have a long relationship with Hounslow Food Box and we are really pleased that we are able to give them support.”

“The hotel very much wants to support local good causes which is why we are involved in a number of projects in the community,” said Jurgen. “The hotel’s activities are in line with Travel with Purpose, Hilton’s corporate responsibility strategy. Hilton is committed to double its investment in social impact by 2030.

“Hounslow Food Box provides a really essential service to people in need through no fault of their own and we are very pleased to be able to help them.”

Anyone wanting to get involved with the organisation can email it at info@hounslowfoodbox.org.uk