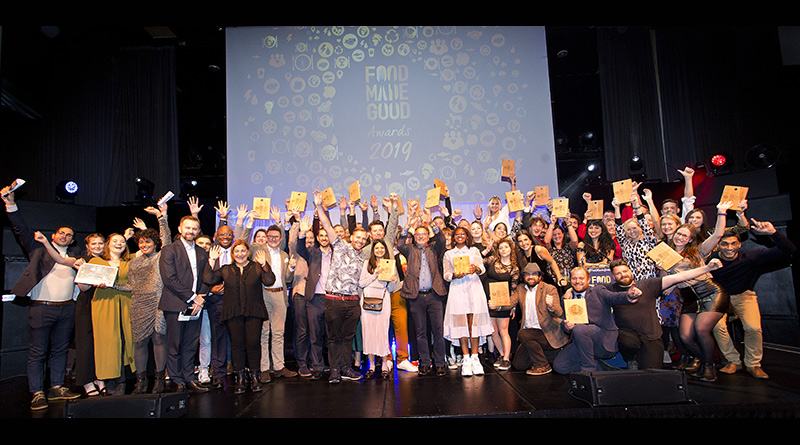 An organic Wiltshire pub that’s stopped serving traditional Sunday roasts and replaced bagged crisps with homemade as part of its war on waste, was tonight crowned the Business of the Year, as Raymond Blanc also named Greta Thunberg his Sustainability Hero, at the Food Made Good Awards 2019, the Sustainable Restaurant Association’s (SRA) annual industry accolades for the most progressive purveyors of food and drink.

Some of the UK’s best-known restaurant and café brands as well as independent operators, caterers and suppliers, were among the 24 winners rewarded for their positive response to the climate crisis, with a host of innovative and impactful ways of reducing their environmental impact and increasing their positive impact on society.

The Wheatsheaf Chilton Foliat received the Business of the Year award from Melissa Hemsley at the special ceremony at Troxy in London, for achieving the highest score in the industry leading Food Made Good Sustainability Rating.

Despite reducing the volume of meat in several dishes, Ollie has also succeeded in keeping his carnivorous customers content, by maintaining the meaty flavour substituting mushrooms for a third of the meat in his burger, for example. With three quarters of its menu now veg-led, The Wheatsheaf also won the Serve More Veg and Better Meat award, sponsored by Lightspeed.

Ollie said: “This is everything we strive for here at The Wheatsheaf. Every decision and action we take is for sustainability. This award is reward for all those decisions and actions. This is about the future of all food businesses. Bring on the revolution!”

Greta Thunberg was named Raymond Blanc Sustainable Food Hero, by the SRA President, for “waking one generation, shaking at least one more and inspiring millions to engage and act on climate change.”

Accepting the award on behalf of Greta, Jessica, a 16-year-old member of the UK Student Climate Network, from North London said: “My message to everyone in the industry is that you need to realise how important the decisions are that you take in your business every single day and that you are completely transparent about them. You must make that information accessible so people young and old can make informed choices about what and where they eat. As Greta says, ‘everything needs to change, and it has to start today’.”

Deri Reed, of The Warren in Carmarthen, was named Chef of the Year, a new award for 2019. Deri has created a restaurant built by the community, it started with a £20,000 crowdfunding campaign, and for the community, realising his dream of running a restaurant showcasing quality Welsh produce and producers at affordable prices.

Raymond Blanc said: “Tonight’s winners of the Food Made Good Awards demonstrate that we can take risks, influence our guests to make better choices and use creative skills to ensure that every meal we serve has a positive impact.”

Other big-name winners at the Food Made Good Awards delivering significant positive change at scale, were:

Nando’s UK & Ireland, in the Support Global Farmers category, for using its influence as the world’s largest importer of African Bird’s Eye chillies to support 1500 farmers through above-market value pricing and training.

The Restaurant Group, whose range of energy saving measures include the introduction of live data for site managers to monitor, saw it reduce electricity and gas by a combined 4,800,000 kWh in 2018, helping it triumph in the Value Natural Resources category.

A full list of the Food Made Good Awards 2019 winners can be found here.