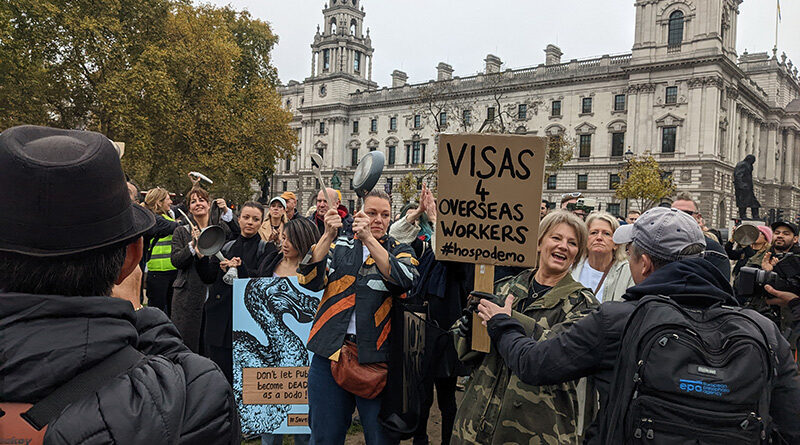 The hospitality sector came together at Parliament Square and outside the Treasury in protest at the government’s lack of support which the sector says is “killing the industry “.

Sector workers owners and supporters came gathered from the throughout the country, including Dorset, Kent, and Manchester, made their way to Parliament Square with their pots, pans, and wooden spoons to make as much noise as possible ahead of the Autumn Budget this coming Thursday.

In impassioned speeches organisers, sector leaders and business owners called on the government to provide three concessions: reduce VAT to 10%, offer a business rates holiday or reduction, and the introduction a visa scheme allowing staff from overseas to work in hospitality.

Opening the demonstration organiser Rachel Harty the current challenges facing the sector as a “perfect storm of inflation, rising costs staff shortages and much more”, these are the toughest times the industry has ever had to face” she said.

“The government must step in to help hospitality before it’s too late” she pleaded, highlighting that the sector is the 3rd largest employer in the UK contributing £130 million to the UK economy each year”

Supporting the sector’s cause was LibDem MP Daisy Cooper, who described “our iconic pubs restaurants and music venues as the beating heart of our High Street”.

Recognising the hard work and dedication by workers in the sector, and described forecasts that up to 1/3 hospitality of businesses could close in the New Year as a “national scandal”.

Recognising how the sector stepped up during the pandemic, helping a vulnerable, delivering food, supporting communities, changing business models overnight, she said it would be “unforgivable if the government was to allow hospitality to fold because they’re not supporting them now”

She demanded that the government “fix the broken business rates system once and for all, I want to see the salary threshold scrapped for visas, and we must extend the energy support system so businesses can plan and invest in the future”

“None of us will ever agree politically and everything he said, one thing we would all agree on is that hospitality is at its 11th hour”.

“We are the 5th biggest industry in the whole of the UK, and I’m sure that Christmas bookings, are camouflaging the reality, unless this government listens to us and unless they stand up and unless they give us the support that our colleagues across Europe have, a reduction in VAT, extending business rates ,lowering the Visa requirements to get people back into the sector, if they don’t listen to us we will see closures in January February March that we have never seen before on record”

In an impassioned and sometimes emotional address, Natalia Ribbe, owner of Barletta and Sète in Margate, who has worked in the industry for over 20 years, added: “Enough is enough. I’m tired of feeling like I live on the red line, whereas the hospitality from this government”? “We are part of history” she added “we bring people together we bring people to this country, and I’m tired of not being acknowledged”

“Hospitality is the first thing to go when you have a recession; we won’t be able to survive if we don’t see some kind of support or acknowledgement from the government.”

Josh Eggleton of Pony Restaurant Group, which includes Michelin-starred The Pony & Trap in Bristol, “Every penny I have ever made in our business I have reinvested in our business and that’s all I’ve ever done, paid myself the bare minimum to make sure that I can make the environments I run better for my staff and customers. We give as much back as possible but now we need to ask for something back from the government.”

He said the industry is “on its knees” and echoed the group’s calls for the government to introduce measures to ease the impact of economic headwinds currently hitting businesses across the UK.

Tom Robinson proprietor of Tom’s restaurant travelled up with his team from Lyme Regis in Dorset to their voices heard. “It cannot go on he said. Our industry has been decimated since the pandemic began and things are only getting worse. Without urgent government intervention, countless more businesses will close, more jobs will be lost, and more lives will be ruined.We are here to make our voices heard”

Oliver Eardley a bartender of 10 years who currently works at Sketch in London’s Mayfair, came to the protest despite having been at work at 3am “deep cleaning the fridges”.

He said he had worked 75 hours a week for the past three months due to lack of staff and his main concern was “getting the EU workers back”.

He said: “I am in a relationship with someone from France. We did long distance for two years and she also works in hospitality. Unfortunately, she spent €1,500 (£1,322) trying to come here six months after Brexit. She already paid and then the company itself got denied the license by the government. Since then, the government have put more and more rules in place.”

After the shaking of cocktail makers, the ringing of bells and the banging of pots and pans the protest moved on to the Treasury, where the crowd united to chant “Save our pubs! Save our pubs!”.

Rachel Harty, organiser of HospoDemo, said: “What’s important is the government listen to what we’re asking for. Jeremy Hunt is currently inside the Treasury that we’re standing outside and is hearing this noise and reading our signs.”

Rachel said the demonstration had received great support from people who were unable to attend simply because couldn’t leave their restaurant, bar, or café to attend because they didn’t have enough staff to work the hours of the demonstration.

Adding that there were also supporters couldn’t even afford the train fare to London to show their support for the protest, because “businesses are so close to the bone”.

Rachel added that I am confident that “We have made our point, we came here to tell the government that the industry needs its support, and am delighted that so many people have travelled from near and far”!