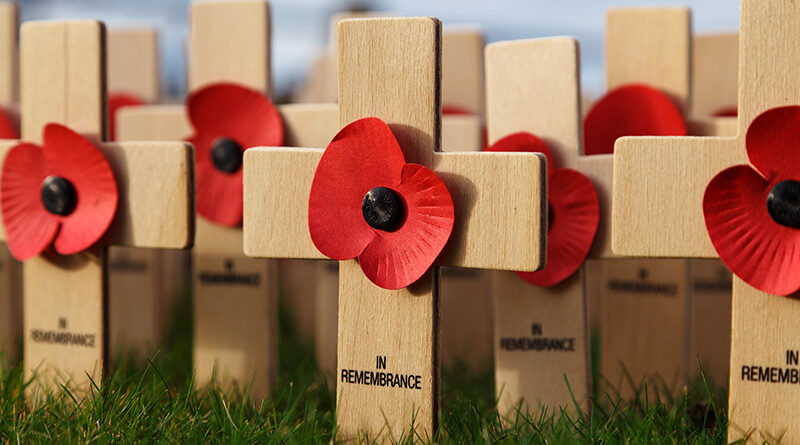 In Flanders’ fields the poppies blow
Between the crosses, row on row,
That mark our place: and in the sky
The larks, still bravely singing, fly
Scarce heard amid the guns below.

We are the dead. Short days ago
We lived, felt dawn, saw sunset glow,
Loved and were loved, and now we lie
In Flanders’ fields.

Take up our quarrel with the foe;
To you from failing hands we throw
The torch; be yours to hold it high,
If ye break faith with us who die
We shall not sleep, though poppies grow
In Flanders’ Fields.

In the spring of 1915, shortly after losing a friend in Ypres, a Canadian doctor, Lieutenant Colonel John McCrae wrote his now famous poem after seeing poppies growing in battle-scarred fields. Unable to help his friend or any of the others who had died, John McCrae gave them a voice through his poem.

Inspired by “In Flanders Fields”, American professor Moina Michael resolved at the war’s conclusion in 1918 to wear a red poppy year-round to honour the soldiers who had died in the war. She distributed silk poppies to her peers and campaigned to have them adopted as an official symbol of remembrance.

On Remembrance Day we remember those who made the supreme sacrifice.

And we remember those who came home, but whose lives were irrevocably changed by the horror of war – the physical and emotional scars that they would, and do, carry for the remainder of their lives.