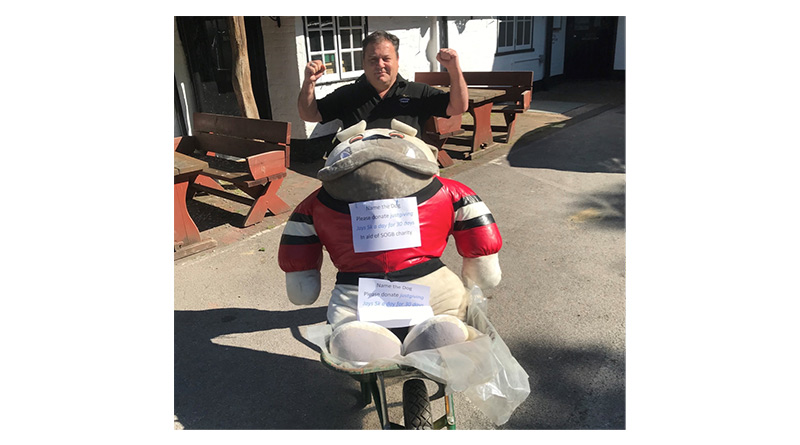 Jason Smith, general manager of well-known pub and hotel The Bull Inn at Sonning, has set out to run a total of 150 km over the next month, raising vital funds for Special Olympics Great Britain (SOGB). He will be running 5k every day for 30 days, a mission he started on 18 May and that finishes on 16 June. Anyone who supports Jason in his endeavours, will also be in with the chance of winning a night’s stay at The Bull after lockdown is over for naming Jason’s mascot dog.

Jason said: “I’ve put on a few pounds since the pub closed and I’ve not been running around so much, so I decided to do something about it and raise money for SOGB at the same time. I know that many charities are struggling with the coronavirus crisis and SOGB normally receive donations from our kids meals and also through the generosity of our customers through the Pennies scheme, where diners round up their bills to the nearest pound.

“However, I know it’s also tough out there right now for our customers too, so rather than just ask for donations, I thought I’d add the chance to win a fantastic night’s stay at our wonderful pub. It will be just the tonic for getting over post-lockdown blues when we are allowed to reopen and all you’ve got to do is name my mascot dog. The best name wins.”

Sian Smith, who is married to Jason and runs The Bull Inn with him, said: “We’ve run a marathon together before – but that was some years ago, so it will be a tough challenge for him. But Jason is a very determined man and I know that he will succeed and raise lots of money too. If you want to see him in action, his usual route is along the Thames tow path from Sonning Lock to Thames Valley Park Fields and back.”

Special Olympics Great Britain is the largest provider of sporting opportunities for people with intellectual disabilities in Great Britain. Through its 140 local, volunteer-led, clubs, it offers sports training and competition for over 10,000 athletes regardless of their athletic ability.

To sponsor Jason, have a go at naming his mascot dog and be in with a chance of winning the top prize of an overnight stay at The Bull in Sonning, just head for Jason’s Just Giving Page at https://www.justgiving.com/fundraising/jason-smith1112.