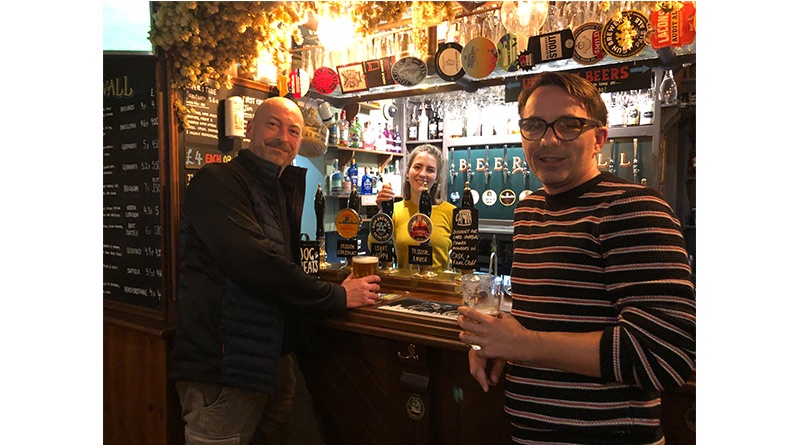 The Nelson Arms in Tonbridge has been named the West Kent CAMRA Pub of the Year.

Hard on the heels of the pub’s first entry in the Good Beer Guide, the Nelson Arms, in Cromer Street, has become the first Tonbridge pub to take the title, in an area which includes Sevenoaks, Tunbridge Wells, Edenbridge and Brenchley.

Landlord Matthew Rudd and his partner Emma Cole rescued the popular pub from closure two years ago, since when the duo have introduced speciality foodie nights, live music, darts and Sunday roasts.

When judges visited the pub last month (January) they found ‘a comprehensive range of well- kept ales, served in tip top condition in a friendly environment and in a professional manner.’

Matthew, 54, said: “Both myself and Emma, along with bar manager Jason Pope and our bar staff Ella and Debbie, were delighted to learn we had won this award. We are thrilled that the judges selected our pub out of more than some 120 others in the region and is a credit to the whole team and to our customers, who continue to enjoy our ever-changing range of guest ales.”

The Nelson Arms is the third pub Matthew and Emma have rescued from closure. They previously ran the Stile Bridge, near Marden, and The Windmill at Sevenoaks Weald – both of which they saved from the axe.

This latest award means Matthew’s pubs have been recognised by CAMRA for the 10th successive year, either in Maidstone, Mid Kent or the West Kent.

In 2014, the Windmill was Runner Up in the National finals of the CAMRA Pub of the Year contest.

Brewer Shepherd Neame shut the Nelson Arms in February 2017 but a year later Matthew and Emma re-opened the doors, much to the delight of the locals in the Barden Residents Association, who had tried to get it listed as an asset of community value.

Today, it is once more a bustling, thriving, pub. The Nelson Arms also currently holds the title of West Kent Cider Pub of the Year.

The pub serves up to eight cask ales and six real ciders, supplemented by 10 craft ales and continental lagers along with a huge array of wines and spirits, specialising in gin – not forgetting a great selection of local juices and soft drinks for the non-drinker.