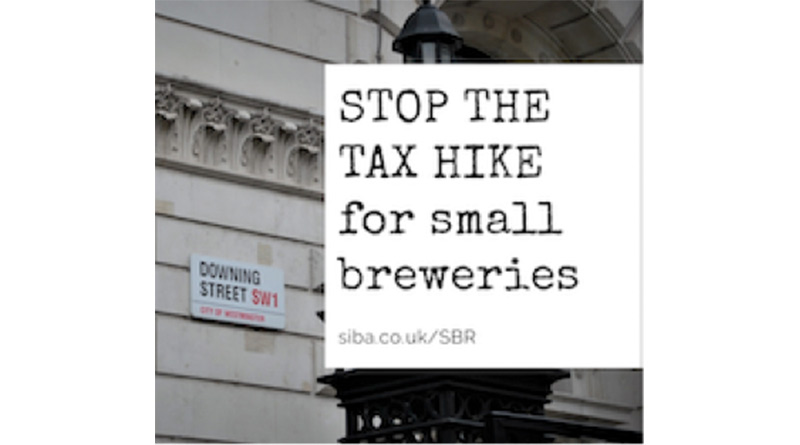 A petition launched yesterday, which calls on the Government to reverse the proposed tax rise for small independent breweries, has received over 7,000 signatures in its first 24 hours.

The Treasury announced changes to Small Breweries’ Relief (SBR), the progressive tax system that revolutionised UK brewing, which will reduce the 50% duty relief threshold from 5,000hl to 2,100hl. Small breweries will have to pay more duty, whilst larger breweries could pay the same or less.

At the time of going to press (9am, 11th August) the petition had gained over 7,000* signatures from concerned members of the public and those in the beer and brewing industry who will be effected by the proposed changes.

A Grassroots Campaign has Begun

Jack Hobday, one of the founders of Anspach & Hobday Brewery in Bermondsey, is the man behind the petition which is being backed by industry body the Society of Independent Brewers.

“This is a big threat to small breweries across the country. Our small brewers have created better competition, consumer choice, jobs, local investment and strengthened local communities. Please support us in reversing the proposed tax rises that could put hundreds of small breweries out of business!”

Small Breweries’ Relief is largely credited with the upsurge in small independent breweries over the last 20 years and creating such a diverse and successful British brewing industry. Consumer choice and quality when it comes to beer has never been as high, but the proposed changes could seriously damage the industry.

“The government has announced plans to change Small Brewers Relief on Duty (SBR) They have not yet released the details of these changes but they have made clear this change would entail some of the smallest breweries, including A&H, paying more duty. We are petitioning to reverse the proposed changes so that our brewery, and many others, can benefit from the certainty of SBR and not face another financial threat after we have managed through the COVID-19 crisis. The last thing small brewers need at this time is the uncertainty caused by these proposed changes.” Jack added.

Brewing industry body the Society of Independent Brewers, who represent around 750 independent craft breweries across the UK including Anspach & Hobday, have given the petition their full backing as part of their call on Government to back British beer by halting the tax rises.

James Calder, SIBA Chief Executive, says the organisation welcomes the Government’s proposals to make it easier for businesses to grow but that this cannot come at the expense of smaller breweries who have been amongst the hardest hit during Coronavirus, having been unable to apply for much of the Government support offered to the hospitality industry.

“Independent breweries have been left high and dry by the Government during Coronavirus, so to hit them now with a proposed tax rise will be devastating. During lockdown small brewers have seen beer sales drop by on average 80%, and just as they are taking their first steps back into normality the news of a proposed Tax Hike has caused a huge rift in the industry.

For some breweries the rising tax bill could force them into closure and for many others it will stifle growth, as breweries delay growth in order to remain small to stay below the level at which beer tax starts to rise. It’s a huge own-goal by a Government aiming to kickstart our economy, stimulate growth, and get local businesses thriving.

The fact that the Government has signalled tax rises for small brewers, but not telling us by how much is further adding to the uncertainty, worry and anger. We need the Government to reverse the decision, or publish the details of their proposals so we know who are the winners and losers, and by how much.” James Calder, SIBA Chief Executive.

*To sign the petition or view the current numbers visit: https://petition.parliament.uk/petitions/334066