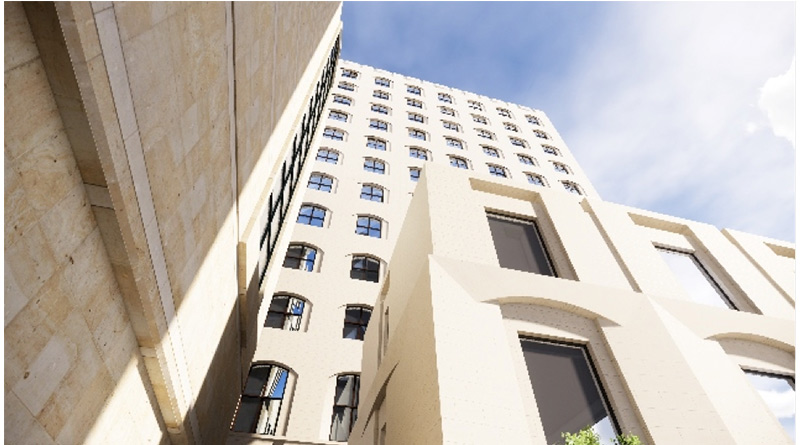 Dexter Moren Associates (DMA) has won planning approval to convert and extend a Grade II* listed 1960s police station in the City of London into a 216-guestroom five-star hotel for Hong Kong based Magnificent Hotel Investments Ltd. DMA’s heritage-led approach to the design for the Wood Street Police Station, which has been declared surplus to requirements by City of London Police, has won praise from influential heritage bodies.

Catherine Croft, director of the Twentieth Century Society, said: “This is one of the finest post-war classical buildings in London and the only listed post-war police station in the country. We are delighted that its future looks set to be secured with this sympathetic conservation-led refurbishment scheme.”

Mark Wood, Partner, Dexter Moren Associates, said: “DMA has worked closely with consultants and stakeholders, creating a sympathetic design that secured a challenging planning consent and found a new and exciting purpose for this well-loved and highly unique heritage property. Reimagining the building as a destination hotel not only celebrates the rich heritage of the City of London but also creates opportunities to open up this grade II* listed asset and allow the public to enjoy its historic interiors.”

Informed by historical analysis and consultation with Historic England and the City of London’s design and conservation department, DMA’s approved scheme places the majority of guestrooms within the existing classical fabric of the building, originally designed by renowned post-war architects McMorran & Whitby in 1966.

The police horse stables will become a gourmet restaurant with dining booths inside the individual stalls, whilst the preserved prisoner cells will be quirky private tasting rooms for the proposed Whisky bar. The sensitive refurbishment of the police assembly hall (Rolfe Hall) will see it blossom into a grand ball room.

The old utilitarian service yard is to be the new heart of the hotel, the focus of guests as they enter. Dropped down into the basement levels to bring natural light deep into the building, the informal area will be topped by a stunning glazed atrium roof and will reconfigure the original vehicle turntable into a central bar. The entrance hall will be stripped back to create a bright, open, welcoming layout with existing details, such as niches containing Roman wall artefacts, retained.

In keeping with the City of London’s Local Plan, which requires new developments and refurbishments to include public realm to both improve the environment and make the City a more attractive, dynamic, inclusive and visually desirable business location, DMA’s proposal includes several public-realm enhancements that will add vibrancy to the area. Once described as a Police Station disguised as a Venetian Palazzo, the scheme will see the creation of a vibrant active public space – a ‘piazza for the palazzo’ – that will improve the heritage setting of the Wood Street station and other nearby heritage assets.

It is hoped the scheme will start on site this year with an estimated opening in 2023.