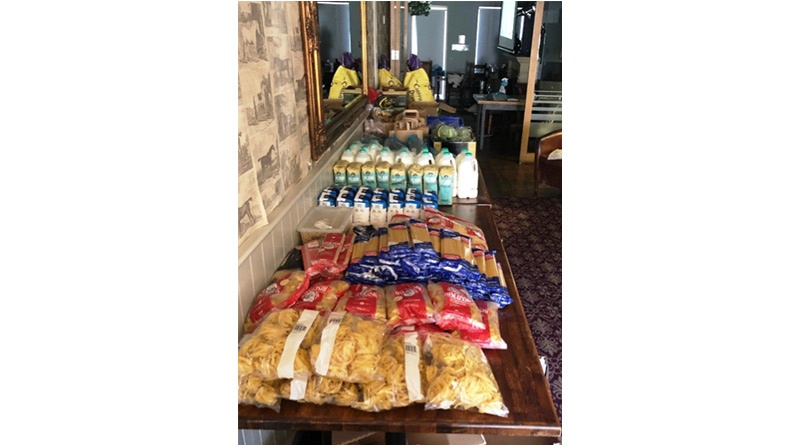 Des O’Flanagan, PubAid co-founder, said: “The Covid-19 pandemic may have closed pubs for now, but their support for their local communities remains undiminished as licensees up and down the country adapt to offer local people practical, social and emotional support to help them weather this unprecedented crisis. If ever there were proof that pubs are a force for good in their communities, this is surely it!

In similar vein, The Cross Keys in Coleorton in Leicestershire delivered 50 lunches from pizzas to Sunday roasts to the community on Mother’s Day.

The Old White Bear in Keighley had taken 129 bookings for Mother’s Day but rather than let down their customers, they made all the meals available for takeway instead, and are continuing to operate a take-out service.

When The Falcon in Prudhoe, Northumberland, had to close its doors, it gave all its excess food to local residents.

The Myrtle Tavern in Leeds has stepped up to support the vulnerable in their local community, dropping off care packages to people self-isolating or unable to shop for themselves. Packages contain vital supplies – tea, milk, biscuits, toilet roll and a bottle of Guinness!

The Plough & Harrow in Leytonstone has donated soft drinks to the local hospital for staff to enjoy on shift, and alcoholic drinks for those who want to take them home. They have also donated to other key workers such as post workers and refuse collectors, and have set up a Facebook page encouraging other pubs to offer the same support for the NHS

Pedal power is delivering pub meals to residents in Addingham, Ilkley. Jon and Amy, licensees at The Swan in the village, have invested in a bike to bring their tasty pub meals, cooked from fresh, to local people.

Lesters in Margate has made its car park available only to NHS workers at the nearby hospital, who are also benefiting from the pub’s takeaway food service. Licensee Barry is doing all he can to support the community, despite being himself in his 70s.

Licensee Carole at The Clifton Arms in Blackburn raised more than £400 from the pub’s community in just half an hour and bought fruit boxes from a local producer to be delivered to the NHS staff at the local hospital. In the last week, the pub also delivered over 40 essential boxes to those who were in isolation or unable to leave home.

The White Hart in Nettlebed near Henley has set up a shop in the pub, offering vital supplies to local residents, and are cooking a daily hot meal, ready for collection if ordered the day before. A poll on the Nettlebed Facebook asking residents if they wanted the shop to continue got 127 votes in favour – and none against! Good work by licensee Ted Docherty and his team of live-in staff who are working on a voluntary basis to serve the local community.

The aptly-named Who’d Have Thought It in St Dominick in Cornwall is offering takeway and home delivery to the local community, and donating £1 for every order to a newly- established food bank offering vital supplies to the vulnerable. Great community support from licensee Tracey Fleming and her team.

The Blue Ball in Braunston, Northamptonshire, has been making up food boxes for the local community. Licensees Dom and Pip also set up a fund so that people can make a donation to purchase a box for those in financial hardship.

The Chestnut Group of 11 pubs in Suffolk, Norfolk and Essex has adapted its offer with freshly-cooked meals available for collection and delivery, live pub quizzes, Q+A sessions with the pub chefs on social media and online breadmaking demos. They’ve also opened shops at the Three Blackbirds near Newmarket and Globe Inn at Wells.

To help keep customers socially connected through the lockdown, The Fleece Inn, Skipton, has moved its weekly Tuesday Pub Quiz online, with quizzers able to see licensee Tim read out the questions. And The Portsmouth Arms in Basingstoke is running two quizzes a day – one for children at 5.00 pm and one for adults at 8.00pm. Around 4,500 people tuned in on the first day!

At The Bull & Bush in Shepshed, Essex, licensees Laura and Nez have set up a Facebook group for their regulars to share quizzes, music and more.