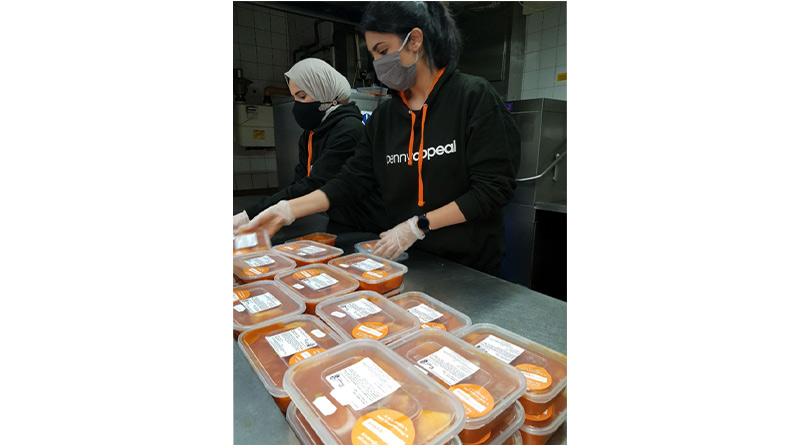 In its final big push in all its humanitarian efforts since the Coronavirus Pandemic began and it opens its doors to the public, the Punjab Restaurant Covent Garden gave its support to global charity Penny Appeal, to provide 10,000 meals for their Holiday Hunger campaign and to families during the month of Ramadan.

Since Lockdown in March 2020, the Punjab has been cooking to feed anybody and everybody in need. More than 175,000 meals have been provided to homeless, those facing hardship, and to those working on the frontline as well.  Penny Appeal is the latest in a long line of organisations the Punjab has partnered with, including Gur Seva, Nishkam SWAT, and local church St Martin-in-the-Fields in Trafalgar Square, and it has also lent a section of its restaurant packing and storage facility for Under One Sky.

Charlene from Penny Appeal, who also volunteered at the restaurant comments, “The Charity Penny Appeal and the Punjab Restaurant have teamed up for the 4 to 5 weeks to provide 10,000 meals to low income families and the homeless across London. We normally provide community Iftars around Ramadan, but as we all are very aware, COVID prevents us from doing this, so we have had to be more creative in the way we deliver meals by teaming up with several partners on the ground who deliver door to door or have set up structures where people can pick up their meals with minimal risk during these times!

All the recipes from the Punjab have been developed especially so that they contain minimum allergens and are suitable for everyone, and can be spruced up with some basics if so desired.  As the initial panic became more organised, The Punjab Restaurant has increasingly been providing such meals to food banks and community centres predominantly across London, who make sure food reaches those that need it.

Punjab Restaurant is a central London based, independent restaurant and facing the same issues in the hospitality sector as any other. Since the start of the pandemic, Amrit Maan, MD of the Punjab Restaurant, has rolled up his own sleeves and been proactively involved in operations alongside a core team of volunteer staff. Early in the pandemic, Amrit even moved into the restaurant to be able to shield his family whilst carrying out this work, and can now regularly be caught doing the early morning cash and carry runs, taking food deliveries out to organisations, as well as volunteering with some of the partners and speaking to those affected first hand.

Amrit has been determined to make the restaurant a community resource to help as many vulnerable people as possible through this difficult moment in history.

In its 75 year history, The Punjab has faced nothing like this, but it has never closed its kitchens. Amrit was determined to keep them open and use the resources he had to help whoever needed it; he and his team have dug deep to help those in need.  Late in 2020, a GoFundMe page was also set up to help the restaurant meet a small portion of the costs for the ever-increasing requests for food, and the support from  far and wide has been phenomenal, with several food donations also being made.Amrit comments,

“It’s somewhat ironic that my great-grandfather lost his siblings to the flu pandemic in the Punjab (India) before he came to the UK and set up this restaurant with some very strong community values.  Working with food banks right across London, I have seen first-hand the demand for food by families and children. It’s only right during such unprecedented times, the Punjab CC to be involved and alleviate holiday hunger.

We’ve not shied away from working with charities representing any faith and this of none.  My faith informs me that we are all one humanity. I wish all those observing a peaceful Eid and thank Penny Appeal for their amazing work.  It really is about working together.”