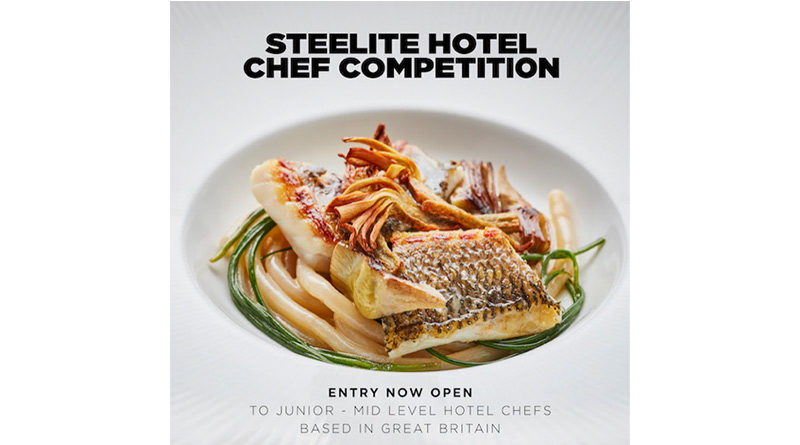 Steelite International has launched their second Hotel Chef competition, in partnership with the Food and Beverage Managers Association (FBMA). Entries are now open to junior-mid level chefs (sous chef and below) as the competition celebrates the next generation of chefs in a fun and creative way.

The competition will be judged by a panel of experts comprising Simon Hulstone (chef proprietor and owner of The Elephant), Antonio Vigorito (FBMA vice chairman) Jenna Campbell (assistant editor of Supper magazine) and ceramics designer Maham Anjum. They will be keeping a close eye on food and flavour, with a particular emphasis on presentation and creativity.

Initially, applicants are invited to submit a main meal recipe for four servings, complete with full ingredients, method and an image of the final dish by 5pm on Monday 2 March 2020. Five finalists will then be selected to take part in a live final on Monday 20 April 2020 in central London, cooking a two-course meal (starter and main) of British classics with a modern twist. They will also select which Steelite crockery to perfectly pair with their dishes.

The winner will be heading on a culinary trip to New York City, attending StarChefs International, and will receive £2,500 of Steelite products for their hotel or restaurant.

Kim Matienzo, VP marketing at Steelite said: “We’re on a search for the next generation of head chefs, so we created this competition as a fun, creative way for chefs on the rise to showcase their work. Bring finessed flavours, perfect presentation and creativity and you could be heading on a culinary adventure across the pond!”

Simon Hulstone, chef proprietor and owner of The Elephant, said: “The Hotel Chef competition is a fantastic opportunity for ambitious chefs, giving them the opportunity to bring their ideas to life and show industry experts what they can do. Expect fierce competition but great fun as we uncover fresh talent from across the UK. Enter now!”

Last years winner, Isaac Griffin of Hotel Indigo Manchester said: “The competition filled me with confidence and eagerness to progress. I have recently been promoted to Junior Sous chef and I believe the competition has helped me with this.

The culinary experience in New York was brilliant too, it was a once in a lifetime opportunity to be surrounded by some really talented people from the industry. I have made some great associates and thank Steelite for the opportunity to be part of this wonderful incentive.”

All entries must be submitted via https://www.steelite.com/shcc where full terms and conditions can also be found.