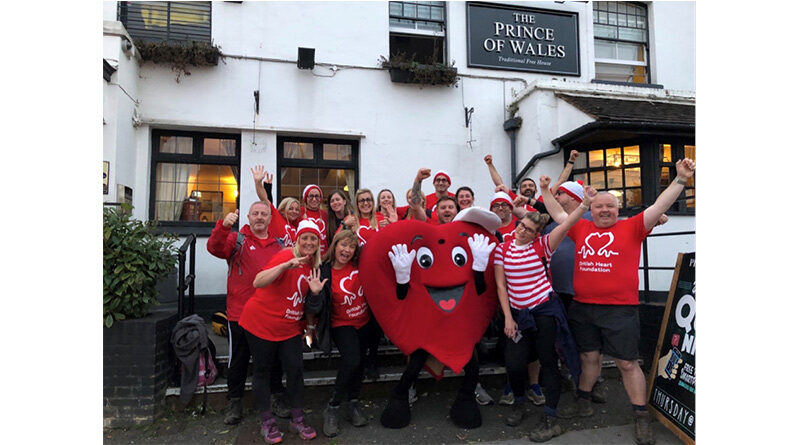 Stonegate Group has raised £315,000 for the British Heart Foundation (BHF) through various fundraising activities across its managed estate.

Throughout last year, over 800 Stonegate Group managed sites have taken part in fundraising to raise life saving funds for the BHF’s 60th Birthday. When the BHF was founded in 1961, 7 out of 10 heart attacks were fatal. Now, at least 7 out of 10 people survive. The money raised by Stonegate Group will go towards the BHF continuing to fund vital research for those living with heart and circulatory conditions in the UK.

All the managed sites took different approaches to fundraise for the cause, whilst also getting customers involved. Activities included the team at The Anglers, Walton on Thames paddle boarding down the Thames raising over £5,000; the team at The Lobster Smack, Canvey Island and The Tank and Paddle, York both walking around their cities to raise over £2,700 between both pubs. Many pubs held quizzes and raffles, bringing their local communities together.

Whilst individual pubs came up with their own fundraising activities for the initiative, all managed sites took part in The Big Beat Quiz and Santa Dash at Parkrun events across the UK. The Big Beat Quiz took place in October and individuals could take part in one of 623 managed Stonegate sites participating, to put their knowledge to the test. There was also a £2,000 prize up for grabs for the winning team. Throughout the night quizzers donated to the BHF through Stonegate’s JustGiving page, contributing to the cause.

The Santa Dash took place across 20 Park Run locations in the UK, with 48 managed Stonegate pubs participating. Between all that took part, they managed to complete over 855km running, jogging, and walking in their Santa costumes and festive attire. Teams participating were supported by their local communities. Awards were also given to Stonegate team members for the fastest dash and best dressed dasher.

Helen Charlesworth, Managing Director of Stonegate Group, said: “This fundraising activity has been excellent and for such a great cause of the British Heart Foundation’s 60th birthday. Everyone that has participated should be very proud of their efforts. I am humbled by what they have achieved. Our pubs are centred around the community, and it has been outstanding to see the part both have played in raising money for a charity that is also part of the communities.

“Taking into consideration the challenges we all faced last year, our teams have truly embodied togetherness and determination, which has been heart-warming to see. Well done all.”

Sarah Webb, Partnerships Manager at the BHF said: “We are extremely grateful for all of the fundraising work Stonegate Group has done to mark sixty years of the British Heart Foundation. We would like to thank everyone who took part in the activity to fund vital research, we are all very humbled by your efforts.

“Over the last 60 years, we have funded ground-breaking discoveries including research that enabled the first UK heart transplant, pacemakers and genetic testing for inherited heart conditions. The funds raised by our partners will help us keeping finding cures and treatments for the 7.6 million people in the UK living with heart and circulatory diseases.”