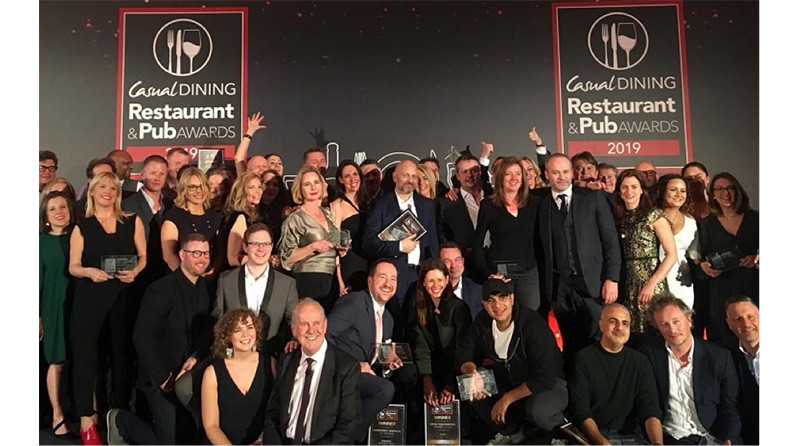 Week in week out, tens of thousands of loyal customers vote for their favourite casual dining brands with their wallets.  Despite the headlines and the challenging market, scores of innovative restaurants, bars and pubs across the UK’s high streets are thriving – with their teams working tirelessly to deliver an all-round incredible casual dining experience.  The Casual Dining Awards 2020 are for them.

Recognising the standout casual dining operators of the year, the shortlist includes nearly 70 brands – ranging from industry titans like Azzurri Group, Casual Dining Group, Greene King, Mitchells & Butlers, The New World Trading Co (NWTC), The Restaurant Group and Stonegate Pub Company (all competing for Casual Dining Group of the Year), to a raft of smaller independents and ‘Instagrammable’ new concepts ready for national expansion.  With today’s announcement, they are all one tantalising step closer to being crowned the UK’s best.

As in previous years, there’s no shortlist for the prestigious ‘Trailblazer of the Year’ Award – just a winner who will be announced on the night.  They’ll be in great company, as previous recipients include Kavi Thakrar and Shamil Thakrar, founders of Dishoom (2019), Chris Hill, CEO of NWTC (2018), David Campbell, wagamama’s then CEO (2017), and Alex Reilley, chairman of Loungers (2016).

“The Casual Dining Awards showcase the excellence constantly achieved within our sector and gives motivation to us all to try harder,” says founding judge Ian Neill, widely known as the “The Godfather of Casual Dining”.

“The Casual Dining Awards are a brilliant opportunity to recognise and acknowledge the success of great people and great brands,” agrees Jo Fleet, MD of Flat Iron.

Brand Marketing of the Year – sponsored by Chef Direct

Restaurant Brand of the Year (20-50 sites) – sponsored by Boutinot

Restaurant Brand of the Year (51+ sites) – sponsored by Fentimans

Casual Dining Group of the Year – sponsored by Carlsberg UK

Trailblazer of the Year – sponsored by Trail