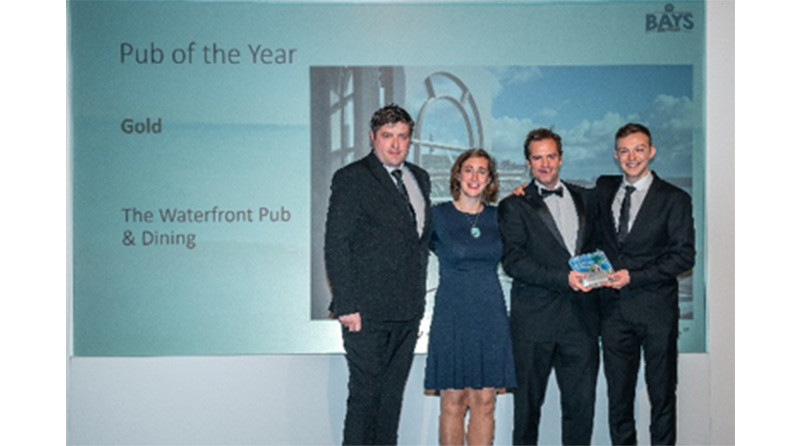 Both award-winning pubs are run by long-term tenants of St Austell Brewery, Steve Bellman and John Milan. The established publicans also run iconic Cornish pub, The Pandora, which came out top at last month’s Cornwall Tourism Awards – taking home Gold for ‘Pub of the Year’ for a third consecutive year.

Devon’s Pub of the Year, the Waterfront, is a contemporary with dining on Plymouth’s Grand Parade. The Waterfront is a Grade II listed building steeped in maritime history. Formerly the home of the Royal Western Yacht Club, founded in 1827, it played a leading role in the sport of sailing and is a landmark destination with world class stunning views. The pub was reopened in 2015 after fierce storms all but destroyed the venue the previous year.

Bronze award winner, the Three Crowns is a part-thatched 5-star inn set in the heart of Chagford, in Dartmoor. Behind its granite facade, it is a magical mix of 13th century features and contemporary comfort and style from its beamed ceiling and huge inglenook fireplaces, to a glass atrium and stunning courtyard garden.

Steve Bellman, long-term tenant of the Waterfront and the Three Crowns said: “John and I are so proud to have taken home Gold for Pub of the Year at two of the South West’s biggest tourism awards this year – what an achievement! We’d like to thank all of the brilliant people who have worked at our pubs – past and present – our amazing locals, our suppliers and our guests for their ongoing support.”

The Visit Devon Tourism Awards, now in their tenth year, showcase the very best in hospitality across the county. This year’s Awards saw a record of 240 entries across 27 different categories, with 167 venues receiving judge visits as part of a comprehensive judging process.