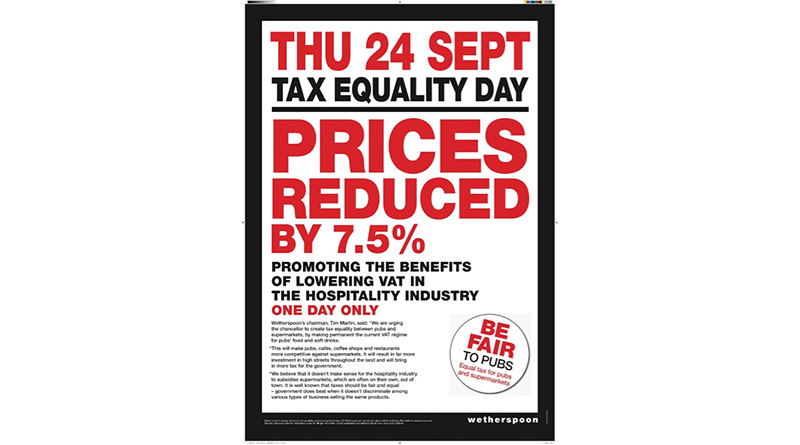 Wetherspoon pubs will be cutting the price of all food and drink by 7.5 per cent on Thursday September 24.

The company’s pubs in England, Wales, Scotland and Northern Ireland are hosting a Tax Equality Day, aimed at highlighting the benefit of a permanent  VAT reduction in the hospitality industry.

Prices at each of the company’s pubs (not including those in the Republic of Ireland) will be reduced for one day only.

In Scotland, prices will be reduced on all food, soft and non-alcoholic drinks and hot drinks.

At present all food and drink in pubs is subject to five per cent VAT as a result of the VAT cut by the Chancellor in July.

Following the Chancellor’s temporary reduction in VAT on food and soft drinks, Wetherspoon reduced ale prices at 700  of the company’s pubs  to £1.29 for a pint of Ruddles Bitter, £1.79 for a pint of Doom Bar, £1.99 for a pint of Abbot Ale and £1.99 for guest beers.

VAT on beer was not reduced, however, Wetherspoon argued that supermarkets had used their tax advantage to reduce beer prices over the years.

Wetherspoon founder and chairman Tim Martin said: “ Pubs have been under fantastic pressure for decades due to the tax disadvantages they have with supermarkets.

“We’re very grateful to the Chancellor for reducing the tax disparity between supermarkets and pubs to five per cent on 15 July.

“We are urging the Chancellor to create tax equality between pubs and supermarkets by making the current VAT regime for pub food and soft drinks permanent.

“It will make pubs, cafes, coffee shops and restaurants more competitive against supermarkets.

“It will result in far more investment in high streets throughout the land and it will bring in more tax for the government.

“It doesn’t make sense for the hospitality industry to subsidise supermarkets, which are often on their own, out of town.

“It is well known that taxes should be fair and equal – government does best when it doesn’t discriminate between different types of businesses which sell the same products.”