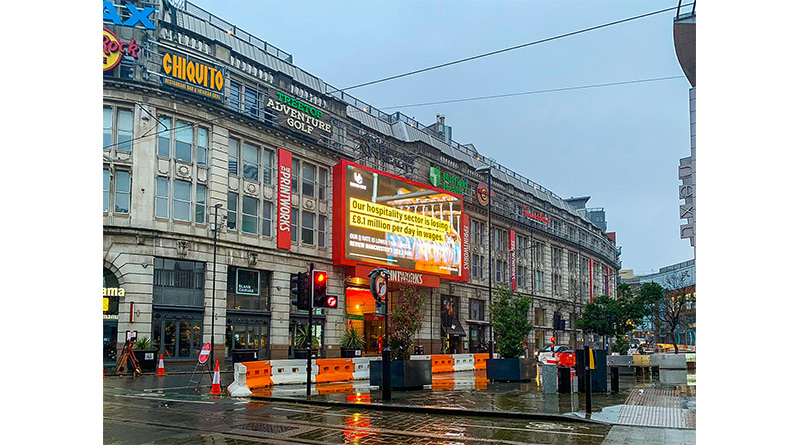 Campaigning group UnitedCity has revealed the results of its first piece of research, estimating that in the run-up to Christmas, Manchester’s night-time economy workforce could be missing out on £8.1m per day in wages.

The sector accounts for 33% of all employment in Greater Manchester, with circa 414,000 people in the region working in jobs or businesses which are active at night.

The current Tier 3 allocation the region has been placed within has seen a near-complete shutdown of its hospitality and leisure industry, save for some restaurants, bars and coffee shops pivoting to a takeaway offering.

Metro Dynamics, which carried out the research on behalf of UnitedCity, has made its calculations based on the window of time since the latest tier came into effect on 2 December, up until the tiering allocation is reviewed on 16 December.

Its findings are based on a select portion of Manchester’s leisure and night-time economy.

In total, UnitedCity has found that £114m of wages will be lost during this time period, segmented as follows:

A spokesperson for UnitedCity said: “The £114m figure is actually a conservative figure, as it doesn’t capture the wider implications for other sectors affiliated with hospitality, such as taxis and catering suppliers.  It also doesn’t consider the additional jobs we all know are created in the run-up to Christmas.

“We have estimated that this can be an additional 50% more staff and existing staff working 25% more hours.

What is important to also highlight is that aside from the staggering value of wages lost, these businesses add so much to our region: venues like HOME, which is a member of UnitedCity, are absolutely vital to our local ecosystem.

“Last year alone, the cultural institution brought £26m into Manchester’s economy. The longer that our businesses are unfairly placed under the stranglehold of Tier 3 and tight lockdowns, the more precarious our economic position becomes. Perhaps even more importantly, we stand the risk of losing the vibrancy that makes our city region so special.”

Restrictions to hospitality within Manchester have had an outsized effect on its economy, due to the size of the night-time sector within the region.

UnitedCity has called on the Government to urgently review Manchester’s Tier 3 status, after data from the same piece of research demonstrated that the region’s R rate had been falling since before the national lockdown in November.

The research and campaigning group, which erected billboards around the city declaring that ‘All Mancs want for Christmas is (Tier) 2’, called the tiering system ‘wholly inconsistent’ and pushed for the Government to review Tiers in advance of 16 December – which had been rumoured to be a prospective reopening date.

“As Christmas approaches, every day counts. This is normally the busiest trading period of the year for businesses within this industry.

“Since March, Greater Manchester has only been in restrictions equivalent to Tier 1 for a total of three weeks. This means that in 2020, leisure businesses in Greater Manchester have not only missed out on Christmas trade, but also on Bank Holidays, Pride celebrations, Halloween, and more.

“There is now an opportunity for these operators to reunite their teams and reopen, but only if the Government approaches the tier reviews sensibly and in good time. Manchester needs to get to Tier 2 as early as possible, and certainly well in advance of 16 December, so that businesses have a chance to adequately restock, prepare, and can open with confidence.

“We must also consider urgently the mental health of those employed by the night-time economy. Some of the figure we have calculated will be paid in furlough, but there are still significant costs and potentially permanent damage to the businesses and workers affected.

“Experiencing financial worries and concerns related to job security around Christmas will be tough for the leisure sector’s workforce, and we must ensure they are adequately supported.”