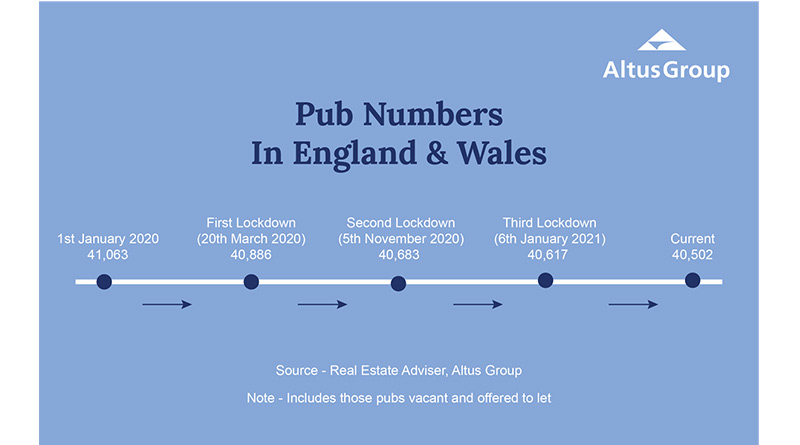 With lockdown rules easing across much of the UK earlier this week, pubs have proved remarkably resilient despite bearing the brunt of national and local restrictions but 384 have ‘vanished’ for good from the communities that they once served.

Around 6 pubs each week, during the pandemic, ‘vanished’ having either been demolished and/or converted into other types of use such as homes and offices.

According to the real estate adviser Altus Group, when Prime Minister Boris Johnson instructed pubs, restaurants and cafes to close on 20th March last year to try and prevent the spread of coronavirus, at the start of first national lockdown, there were 40,886 pubs in England and Wales including those vacant and being offered to let.

With pubs in both England and Wales reopening indoors on Monday, despite 3 national lockdowns and tiered local restrictions during the last 14 months, that number has only fallen marginally by 1% to 40,502 according to Altus Group.

Robert Hayton, UK President of Expert Services at Altus Group, says “pubs have endured a torrid time during the pandemic but have proved remarkably resilient aided by Government interventions such as furlough, grants, rates relief and liquidity in the form of cheap loans helping to keep the ‘pilot light on’ for their reopening.”

The Chancellor, Rishi Sunak, announced at the Spring Budget earlier in the year a £150 million financial lifeline through a new Community Ownership Fund to try and help communities protect their favourite local pubs from demolition and redevelopment.