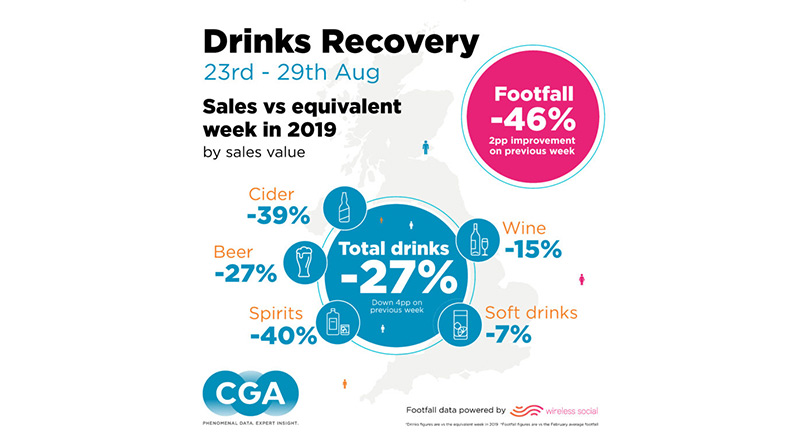 The Eat Out to Help Out scheme gave food and drink sales another major lift in the first half of last week, CGA’s latest data shows—though they fell away in line with dropping temperatures towards the weekend.

Figures from CGA’s Volume Pool of 7,000 managed outlets shows that food sales last Tuesday and Wednesday (25 and 26 August) were more than double those of the same days in 2019, at 107% and 103% up respectively. Sales on Monday (24 August) were distorted by the comparison with a Bank Holiday Monday in 2019, but were nevertheless 40% higher year-on-year.

As in previous weeks, food sales comparisons struggled later last week. They were down by 20% year-on-year on Thursday (27 August), and by 19% on both Friday and Saturday (28 and 29 August). But across the whole of last week, food sales were 17% higher than in the equivalent period in 2019, despite the tough comparative. It represents a steady increase from a 9% drop in year-on-year sales in the first week of the scheme, a 3% rise in the second week and a 15% rise in the third week.

The Eat Out to Help Out offer ended this Monday (31 August), when sales will also have benefited from the Bank Holiday. The government has announced that more than 100 million meals were claimed over the whole of the month-long scheme.

The deal also had another significant impact on drinks last week. CGA’s Drinks Recovery Tracker shows year-on-year sales were up 11% and 29% on Tuesday and Wednesday (25 and 26 August) respectively. Across the seven days to last Saturday (29 August), the Tracker recorded a 27% fall in sales versus the same week in 2019, when figures were inflated by the Bank Holiday weekend.

Soft drinks’ eligibility for the Eat Out to Help Out offer meant their sales were down only 7% year-on-year. Wine continued to benefit from sales with meals, having its best week since the end of lockdown with a 15% drop. With cooler weather across the week, sales of beer (down 27%), cider (down 39%) and spirits (down 40%) all fell back. As with food, drinks sales were weaker in the second half of the week, with total sales down more than 30% on each of Thursday, Friday and Saturday.

These year-on-year comparisons show how the popularity of the Eat Out to Help Out offer has mounted week by week,” says Rachel Weller, CGA’s Head of Consumer Research and Marketing. “With a positive effect on drinks sales too, it has helped many restaurant and pub operators get back on their feet after lockdown. Now the scheme is at an end—albeit with some operators extending the offer out of their own pockets—the big question is whether the momentum can continue into September. If consumer confidence about safety and spending is sustained then sales will hopefully trend upwards over the autumn—but market conditions remain extremely fragile.”

Footfall data from Wireless Social meanwhile suggests that consumers are gradually returning to city and town centres. Although footfall was 46% down on the weekly average in February, this marks the best result since the start of lockdown and an increase of nine percentage points in the last two weeks.