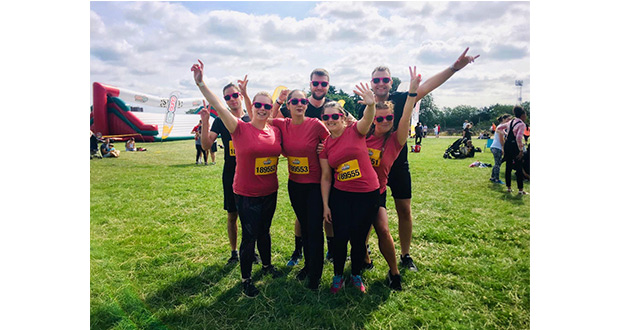 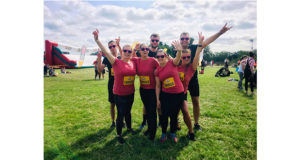 Belvar, the Management company responsible for all UK Moxy hotels, has launched a year-long fundraising initiative for Hospitality Action charity.

7 Moxy Captains and their boss kicked off the fundraiser by taking part in the Gung-Ho 5k obstacle run on Saturday which was held at Crystal Park Palace in London.  It was a chance for the team to prove their mettle on the world’s biggest inflatable run.

Chosen by all the participating Moxy Captains in London, York, Aberdeen Edinburgh and Glasgow, Hospitality Action will benefit from 12 months of activity across all of the company’s UK-wide hotels.  Established in 1837, the charity offers vital assistance to all who work, or have worked within hospitality in the UK but find themselves in crisis.  They support people suffering from illnesses, experiencing poverty, bereavement or domestic violence or people who have retired and may feel isolated as a result.

Donovan Sumner, Director of Operations for Belvar, who also took part in the fun run said: “It’s exciting for us to have chosen our first charity to be involved with and something that is close to our hearts.  For us, it’s not just about running a hotel, but actually giving something back to the community.  It was great fun on Saturday and there was real camaraderie amongst the team.  I’d like to thank each and every Captain who all put in a huge effort to ensure they raised as much money as possible for such a worthwhile charity.  We look forward to carrying on raising awareness and money for Hospitality Action, with each hotel doing its own fundraising going forward over the next 12 months.”

If you would like to help Moxy raise money for Hospitality Action, head to their Just Giving page at https://www.justgiving.com/fundraising/moxyhotels