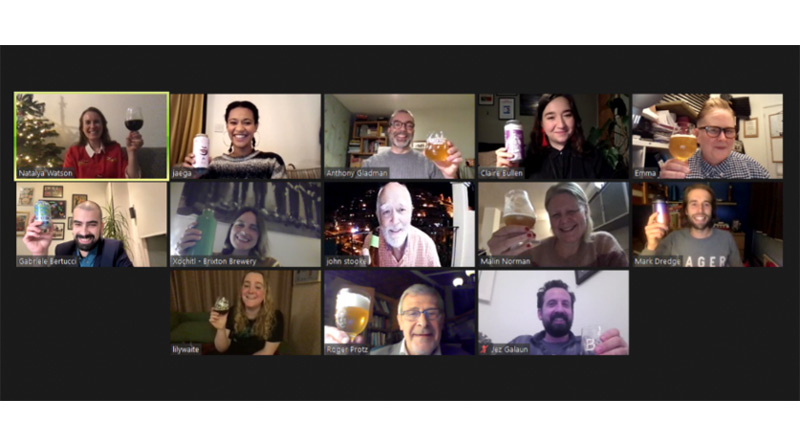 London-based beer writer, photographer and visual artist Lily Waite has been named Beer Writer of the Year 2020 at the Guild of Beer Writers’ Annual Awards. The winners were announced on a Zoom event on 10th December.

Beer Writer of the Year is the top accolade in the Guild’s annual competition for communication about beer and pubs, which this year received close to 150 entries across nine categories. Waite won the Gold Award in the Online category, and a Silver award in both the Beer and Travel and new ‘Communication in Lockdown’ categories.

Waite’s winning writing included articles in Good Beer Hunting, Pellicle and Ferment, as well as her zine Until Further Notice in the lockdown category. She is also the founder of the Queer Brewing Project, an LGBTQ-focused non-profit collaborative beer initiative.

Jonny Garrett, chair of judges for this year’s Awards after taking the Beer Writer of the Year title in 2019, said, “In a year of exceptional writing it was going to take something really special to stand out. What impressed the entire judging panel with Lily’s work was how she found a fresh approach to every topic. Her writing this year was as much about our drinking culture as it was beer itself, which made for rich and rewarding reading.

“There were many worthy winners within the shortlists and it’s a reassuring sign that, even in these tough times, British beer writing is more exciting, diverse and vital than it has ever been.”

Guild Chair Pete Brown said: “Earlier this year, we were questioning whether we would be able to run our Awards at all, but we’re delighted that, thanks to our sponsors, we’ve been able to offer our winners trophies, cash prizes and recognition from their peers, albeit we had to celebrate on Zoom rather than at our usual glitzy dinner!”

This year’s competition included two new categories, for the Best Communication about Beer and Pubs during Lockdown, sponsored by Shepherd Neame, and the Best Writing about No and Low Alcohol Beers, sponsored by Budweiser Brewing Group. The Best Citizen Beer Communicator award was sponsored for the first time, by Harvey’s Brewer.

The Brewer of the Year title, sponsored by SIBA, was presented to Oliver Fozard, head brewer at Rooster’s Brewing Co, after he won the highest number of votes in a poll of Guild members.

Presenting the Award, Pete Brown said: “Oliver is a hugely popular figure in the brewing industry and his win this year in our vote was decisive. He’s taken on the mantle at Rooster’s and overseen the move to a new brewhouse, while continuing to produce a stunning core range of beers at the same time as creating new ones under the Outlaw Project. But on top of that, he’s been an excellent ambassador and role model for positive mental health in the industry with the launch of collaboration beer Mind Games. and through speaking out and writing publicly about his own experiences.”

The winners were announced during a Zoom event attended by most of the finalists, judges, sponsors and other Guild members.

AND THE WINNERS WERE…

SIBA Award for Brewer of the Year

Winner: Brixton Brewery for the Characters of Coldharbour campaign

Winner:  John Stooke for Last Orders: A History of Pubs in Swindon

Silver Award: Gabriele Bertucci for the What’s in the Glass podcasts

Winner:  Emma Inch for the Fermentation in Isolation podcasts

Silver Award: Natalya Watson for the Beer With Nat podcast

Winner: Natalya Watson for the Beer With Nat podcast

Silver Award: Malin Norman for article in On Tap magazine

Winner: Emma Inch for a series of programmes on Fermentation Radio

Highly Commended: Will Hawkes for a report on Pubs and Sport for PubAid

Silver Award: Lily Waite for articles in titles including Ferment and Pellicle

Silver Award: Claire Bullen for writing in titles including Imbibe and Independent Brewer

Winner: Roger Protz for The Family Brewers of Britain

Silver Award: Mark Dredge for A Brief History of Lager

The Michael Jackson Gold Award for Beer Writer of the Year 2020: Lily Waite