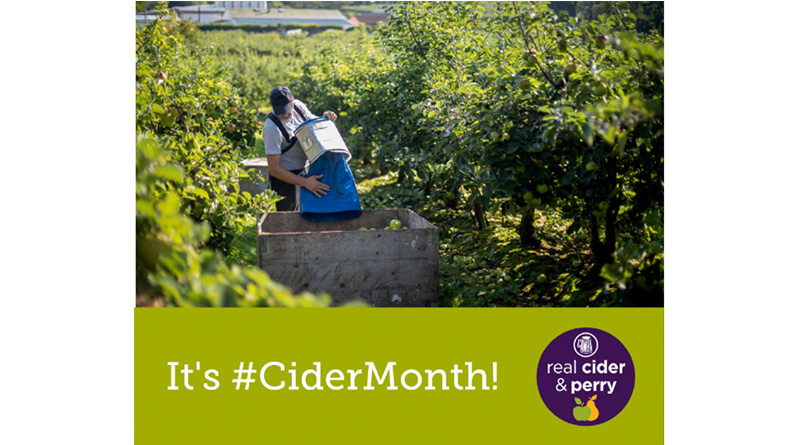 The Campaign for Real Ale (CAMRA) will be celebrating its biannual Cider Month throughout the month of October, raising awareness for the cider and perry industries’ struggles ahead of the Autumn Budget.

CAMRA have partnered with ‘The Ciderologist’ Gabe Cook, to launch a cider campaign ahead of the Government’s Budget announcement at the end of October. This campaign will call for cider duty reform in order to better support small, local and independent producers.

As regulations and restrictions related to the coronavirus pandemic have been wound down, the organisation is able to mark the Month with physical events. In order to promote these to members and fellow cider lovers, CAMRA will be publishing a month long ‘content crawl’ timeline, following the success of a similar feature in May. This timeline will include a selection of content aimed at both new cider drinkers, and those who already enjoy it.

New content pieces from some of the key figures in the cider and perry world will be published on CAMRA’s national website. The revealed content will include:

Nik Antona, CAMRA National Chairman said: “I am delighted that we are finally able to return to in person events this Cider Month. We have plenty of content for cider and perry lovers to enjoy, and people will also be able to get out and attend events with their branches or local communities, and support local pubs. I hope cider lovers enjoy following our content crawl timeline, and perhaps even find a new favourite tipple to recommend.

“This year, we are also taking the opportunity to partner with Gabe Cook and launch our Cider Duty reform campaign. We want to see changes to cider duty that mean fairer cider taxes, support for producers and that ensure consumers are getting the highest quality real products. Visit our website to learn more!”

CAMRA supports and campaigns for cider and perry throughout the year, and spotlights them with celebrations twice a year. These are in October and May, during which time local CAMRA branches organise cider and perry events across the country. October was chosen as it is an extremely busy time for cider makers when production is in full flow and fruit is being harvested, milled, pressed and stored for fermentation.

Unlike real ale production, which can happen at any time of the year, real cider and perry is generally a seasonal, sustainable product as it can only be made when the fruit is ripe. Production is tied to a natural cycle of the apple and perry pear trees found in traditional, biodiverse orchards around the country.