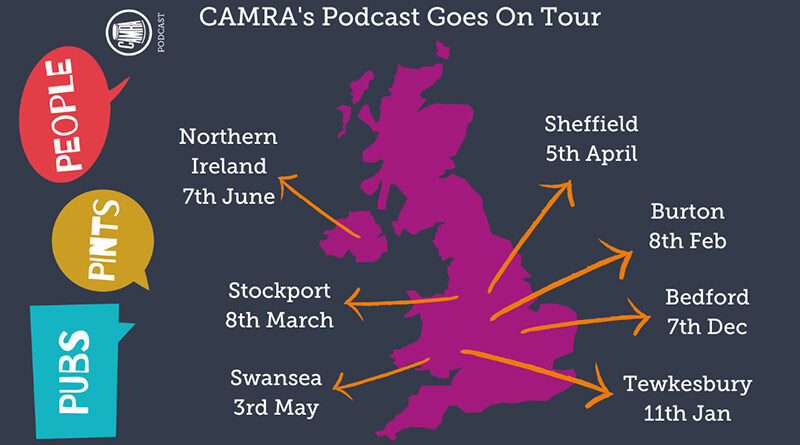 The popular CAMRA podcast Pubs. Pints. People. is set to return to the airwaves just in time for Christmas featuring a highly anticipated episode featuring beer and food pairings, perfect for the festive season.

The first episode of season six will air on Wednesday 7 December and the show will once again return to its monthly schedule as it goes ‘on tour’ around the country, shining a spotlight on local CAMRA branch activity.

7 December – ‘tis the season for… food & drink highlights some exceptional beer and cider pairings with your Christmas dinner, cheese board and dessert tray. Hosted in Bedford, it will also shine a spotlight on the popular new local brewpub BrewPoint by Wells & Co.

11 January – New beer resolutions will feature Adrian Chiles’ new book ‘The Good Drinker – how I learned to love drinking less’ and the ‘Beer Diet: How to Drink Beer and NOT Gain Weight’ by Gary Greenberg. It will also examine the Government’s approach to beer and pubs last year, and what the Campaign wants to see in 2023.

8 February – More than a pub will cover the varied roles of the Great British Pubs in supporting their communities and as sites of history and heritage. It will be hosted in Burton to tie into CAMRA’s Great British Beer Festival Winter which will be held locally by the branch.

8 March – Musically brewed beers will examine the impact and inspiration of music on the nation’s pubs and brewers and shine a spotlight on the local Stockport branch ‘Mild Magic’ passport.

5 April – Women in the Brewhouse highlights the historic role of women in brewing and feature some fantastic all female collaboratives taking place across the country. Hosted in Sheffield, it will also feature CAMRA’s Members’ Weekend, AGM & Conference.

3 May – Wild brewing & foraging will explore some of the more fascinating aspects of brewing including the botany of beer, wild brewing and hop farming. It will be hosted by CAMRA’s Swansea branch to highlight some of the unique campaigning issues in Wales.

7 June – The future of cask beer will feature an exciting new campaign to modernise cask beer called ‘Drink Cask Fresh’ as well as a new book from Des de Moor on the nation’s favourite drink. It will be hosted in Northern Ireland, highlighting local issues such as the surrender principle, and the impact that has on local campaigning.
The new season will also host a range of new features, including regular beer & food pairing recipes from food and drinks writer Christian Gott and highlights of what CAMRA means to volunteers.

Podcast producer Katie Wiles said:
“The Pubs. Pints. People. podcast is a fantastic way to help share our love and passion for all things beer, cider, pubs and clubs with our members and the wider beer community. We have a fantastic line up of topics and interviews for our next season and encourage both regulars and new listeners to tune in to the show next month. There is also plenty of episodes currently available from season one to five to whet your appetite until our season 6 launch date!”

Pubs. Pints. People. is available to download on Apple Podcast and Spotify, as well as directly from Acast at https://shows.acast.com/pubspintspeople