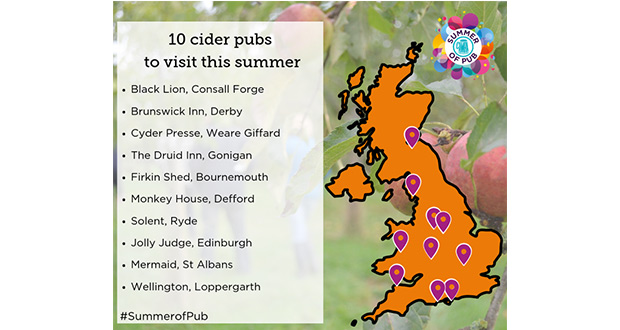 CAMRA members from across the country have shared their recommendations of the top cider pubs to quench your thirst this summer as part of its ‘Summer of Pub’ campaign.

The pubs offer a huge range of real cider and perry styles and flavours on tap, keeping the great British tradition of cider production alive and kicking. From excellent street-corner locals to award-winning cider hotspots, there is something for everyone.

The recommendations form part of CAMRA’s Summer of Pub campaign, which has seen hundreds of pubs organise events to showcase what they have to offer, ranging from special screenings of the Women’s World Cup to quiz nights and theatre events. In return, CAMRA’s nearly 200,000 members have galvanised to publicise and promote events within their local communities.

Ben Wilkinson, CAMRA’s National Director said: “Great pubs don’t just serve great ales – real cider is an important offering for those who prefer something a bit different and a world away from the mass-produced ciders that are commonplace.

“While most people value the role community pubs play, not everyone is aware of the huge financial pressures that they face and the threats to their survival. Our Summer of Pub campaign aims to show what pubs have to offer and remind people how important the great British pub is to communities. From special screenings of the Women’s World Cup to comedy evenings, beer tastings or special talks, pubs have pulled out all the stops to celebrate this summer and provide something for everyone.”

To find more pub events and a map of activity, simply visit www.camra.org.uk/summerofpub/